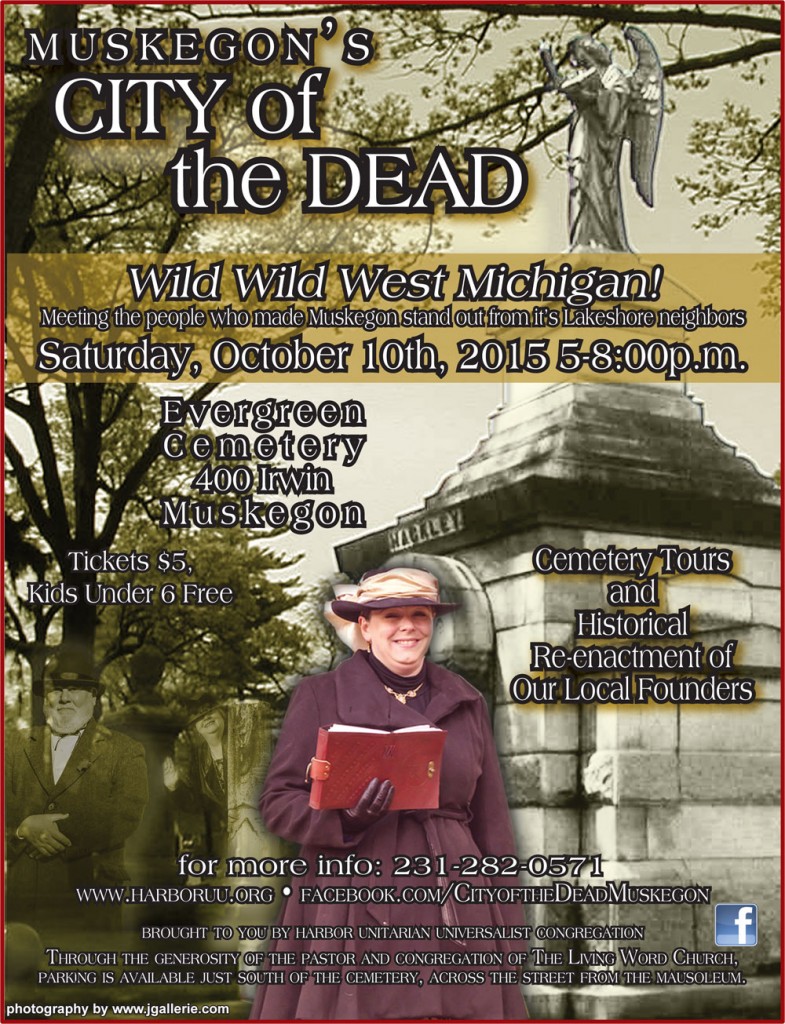 People experiencing the tour in past years were pleasantly surprised at how informative the reenactments are, and at how much fun it was. Many expressed appreciation for the great research efforts made on the various historic figures and that the re-enactments tell their stories with pride and humor. Many characters represented are former makers of the community of Muskegon. Several additional, colorful and interesting characters are presented.

For example; John, B. McCracken is a readily recognizable name. But did you know that, although he liked to keep his name out of the local paper, he was very proud of the temperance movement he started? This movement included pledging to refrain from consumption of alcohol as well as establishment of Muskegon’s first stage and opera house and a reading room. These gave the lumbermen and river men something to do besides drink their season’s wages away in the many saloons in the rough and tumble early years of Muskegon’s lumber era. McCracken helped to make Muskegon a better place for all citizens and helped to shape Muskegon into what it is today.

There are others, such as Thomas Hume and Captain Jonathan Walker, the “Man With The Branded Hand”. Walker was imprisoned in the South before the Civil War for attempting to steal slaves, wrote a popular journal of his imprisonment and had a popular poem written about him by John Greenleaf Whittier (titled; “The Man With The Branded Hand”). He later settled in Muskegon and after his death over 6,000 people came to Evergreen Cemetery to hear the invocation by Fotius Fisk. Fisk was the chaplain of the US Navy and a friend to Walker, and donated the obelisk that, still, stands at the north entrance to the cemetery.

Some new characters this year include Dr. Lucy Eames, the first woman physician in Muskegon County; Nelson DeLong a prominent lawyer who supported the “10 hours or no sawdust” strike by lumber mill workers and won two terms as mayor of Muskegon; James Snow telling the colorful story of the short man on a white mule riding into town during celebrations of the end of the Civil War and many more.

Visitors taking the tour are in for a real treat. They will learn a great deal about Mr. McCracken and his many peers, having fun while learning that each of the very real persons who helped Muskegon grow had a sense of humor.

The City of the Dead honors those calling Muskegon home long before us. Through very extensive research these very engaging stories have emerged from the record, and are revealed by the reenactments. . Stories of romance, tragedy, and curiosity are told, with a theme running throughout of great dedication by these founders towards making our city a better place.

The cost is $5.00 per participant, children under 6 are free.