We received a letter addressed to the Citizens Committee late Monday afternoon from JB Meeuwenberg, one of the leaders of the Vote “Yes” for Fruitport’s Future Committee. I read it while eating between 7:00 and 7:30 p.m.  JB indicated he would like it published on our FAN Updates website. Since the election is tomorrow and since there is a number of statements that the Fruitport Citizens Committee for Better School Management would probably disagree with or at least want to respond to, and since I am unable to get the letter into their hands to give them that opportunity at this late hour, it’s my judgment that I should not publish it at this time.

Below are images of a 4-page informative flyer about this millage that was recently released by the Fruitport Citizens Committee for Better School Management. You can read the flyer by clicking on each image to open a readable/printable PDF version. 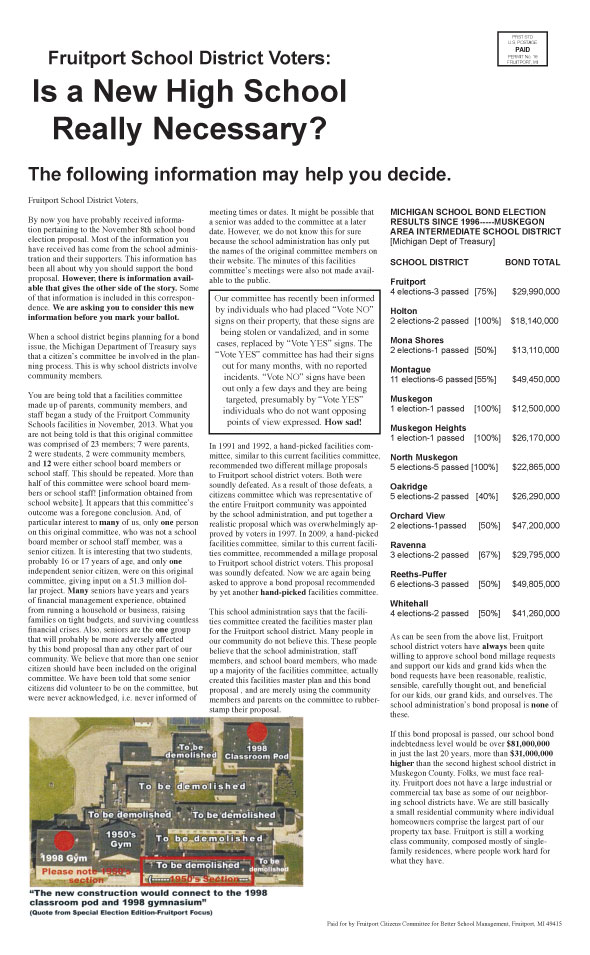 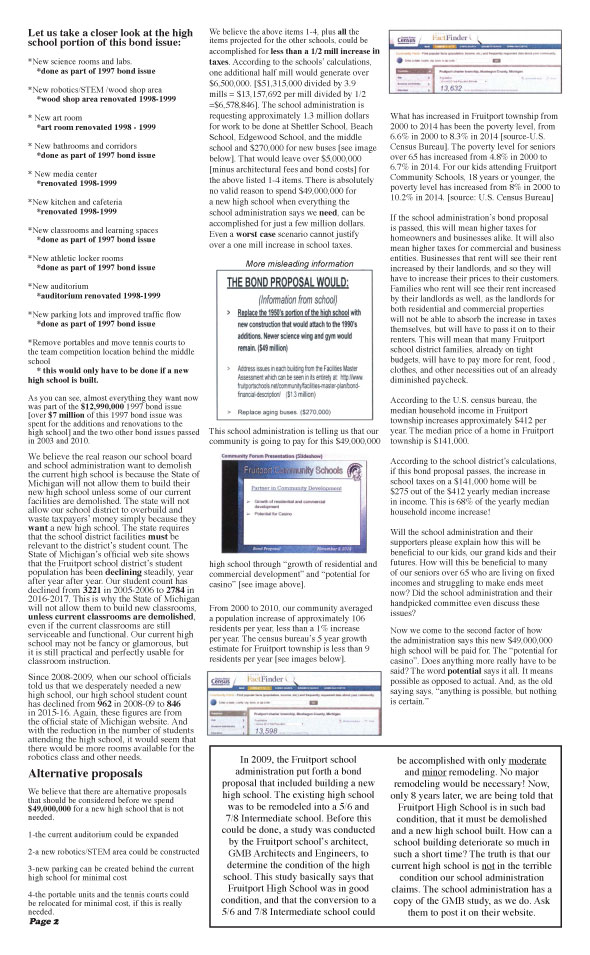 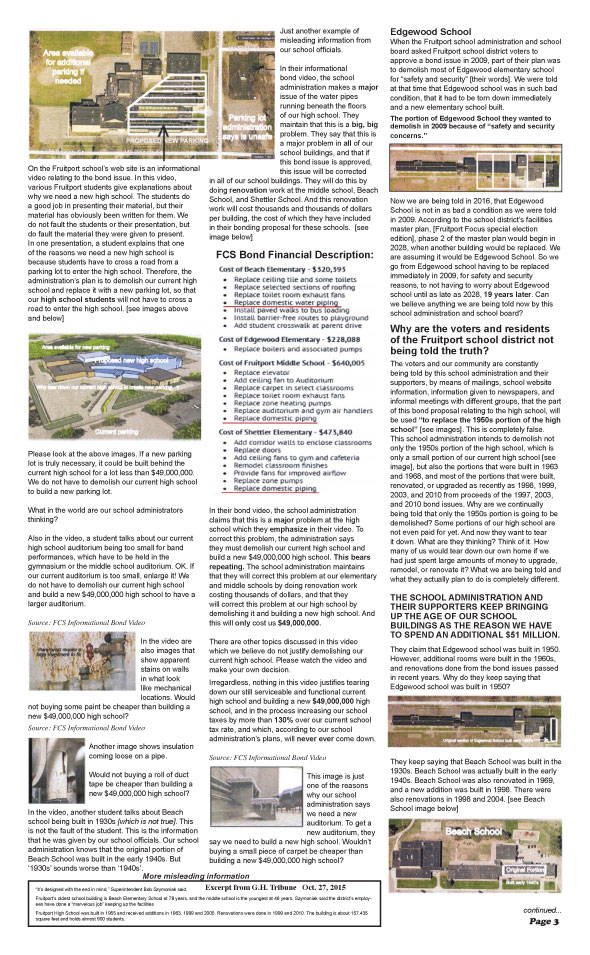 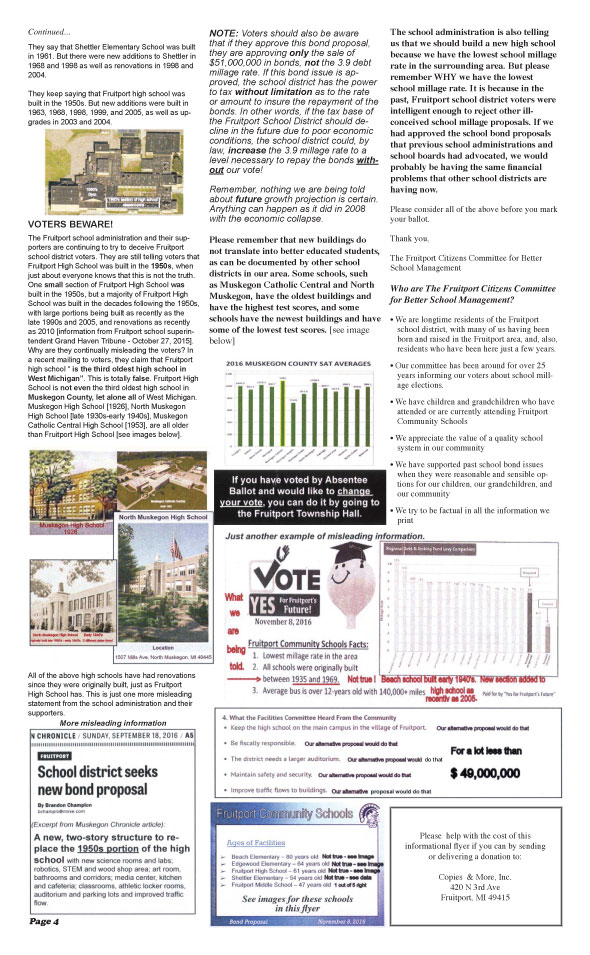 Fruitport Community Schools and the Facilities Committee is requesting a bond proposal to do a major renovation to the current High School and minor renovations to all other school buildings based on their study of our current facility needs.  They have made these determinations based on “community sentiment.”  Their objective was to develop a plan that would: 1.  Keep the high school on the main campus, 2.  Be fiscally responsible, 3.  Build a larger auditorium, 4.  Maintain safety and security, and 5.  Improve traffic flow to buildings.

FCS has been operating at a deficit since 2009.  This fact is never mentioned in the Committees Assessment or in the supporting campaign.  The number one priority of the Master Plan should have been how to eliminate the continuous operating budget deficit.  The current Master Plan reached by the administration and Facilities Committee does absolutely nothing to deal with this deficit.  With state money and the economy always in flux, the district needs to be proactive in dealing with future budgets.  A legitimate Master Plan would address how to use new construction, renovations, and consolidation of services to eliminate the budget shortfall.  The current plan essentially demolishes and rebuilds every building in the district over the next FIFTY years.  It would spend multi-millions of dollars and leave us with the same number of buildings on the same number of campuses, requiring the same amount of administrators, teachers, maintenance staff, bus drivers, and needing the same amount of building maintenance, landscaping, and parking lot maintenance.  I don’t know of any other district whose plan is to demolish and rebuild every building in their district.  It doesn’t sound fiscally responsible to me.

I have devised a Master Plan Alternative that would save the tax payers of Fruitport millions of dollars in construction and eliminate the deficit in a more fiscally responsible manner.  While I agree that our facilities are inferior to those of neighboring districts, I feel that prospective residents look at test scores more than facilities to determine a school district to send their children.  If we can consolidate our district down to one campus/three buildings with one bond proposal, we can cut unnecessary spending so that money can be spent more directly on education and hopefully raise the test scores to the level of our neighboring districts.  This would attract more residents and increase the tax base so that we can more easily afford to build newer facilities in the future.  There are many proposed housing developments that have recently been announced and of course the proposed casino that could provide a major boost to the tax base in the FUTURE.  Unfortunately they have not been built so it is too soon to build a shiny new toy like the high school.

My plan is to build an addition onto the back of the Middle School to relocate all 3rd5th grades and move all preK-2nd grades to Edgewood.  This would close Beach and Shettler so that no more money would need to be spent on those aging buildings.  It would also bring all grades to the main campus and give the school district more staffing flexibility for each grade.  This step alone should eliminate the spending deficit.  The high school would get an arts wing featuring a new auditorium and classrooms to give our district an appropriate sized theater and allow us to eliminate the costly portable classrooms located by the high school.

As you can see, there is no need to take fifty years to implement a fiscally responsible Master Plan.  If you would like to read the details of my plan, including diagrams, please go to my Facebook page:
www.facebook.com/FruitportMasterPlanAlternative

Thank you for your attention,
Concerned Tax Payer
Mike McCallum

I recently spoke brieﬂy with you at the seniors dinner during Old Fashioned Days. I talked with you about the upcoming school millage, and asked you some questions about it. You were honest to say you didn’t know a whole lot about it at this time. You also said that your paper does not come out as often as it did before and that you probably would not have much information to give to the voters before the election. My concern that I expressed to you was that I and other voters would not have enough information about the millage before we vote. I sometimes get information in the mail from the school but that information only tells me why I should vote yes for the millage. By the way I no longer get the chronicle paper. I want to say that I am not a no voter on all millages because I have voted yes on school millages in the past. But I am concerned that I will not get all the information I need about this millage before I vote. I would like to get both sides, the pros and cons, before I have to decide. My daughter found some information on the internet from the school. She said the millage rate will more than double our current rate from 3 mills to 7 mills. This will more than double my taxes. She said the amount will be about 50 million dollars for a new high school and some other things. She also said that the new 7 mill rate will never go down again. It will always be at least 7 mills or more. I understand the old high school will be torn down. Is this really necessary? There are so many things about this election that I do not understand. Will the school be having meetings like they did before? When will they be? How long before the elections? How will the school get information about the meetings to the voters? Your paper used to give us lots of information about the school millages in the past. I hope you will do the same this time. You suggested that I write this letter to your paper to let others know that might have similar concerns. I told you that I did not wish to sign my name because of the reasons I told you. I have thought about it some  more and still think I should not sign my name. I do not know if you will print this without my name. I hope you will. Thank you again for your courtesy in taking time to talk with me during the seniors dinner.