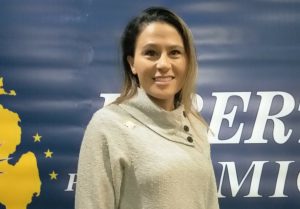 Romulus: Delegates to the Libertarian Party State Convention overwhelmingly approved Auburn Hills Attorney and Businesswoman Angelique Chaiser Thomas as their choice for Lt. Governor. The Libertarian party of Michigan is now a major party categorically on par with the the other two major parties, the Republicans and Democrats.

Libertarian nominee Bill Gelineau, fresh from his recent primary win, seemed ready for the Party’s next fight saying, “We have earned a place in the debates”. The actions of the convention underlined the unprecedented unity of the Party. “Angelique and I will provide clear and solution-oriented perspectives in what otherwise has been a mud-slinging affair thus far”, Gelineau quipped.

For her part, Ms. Thomas offered both humility and a glimpse of the race ahead. “I’m incredibly humbled that the Convention has given me the opportunity to be part of this massive effort to break the so-called two-party system. But, if Michigan citizens vote their conscience…based on their beliefs instead of their fears, we cannot lose.”. Ms. Thomas’ short biography is available at:

The overflow crowd of delegates at the first-ever Major Party Nominating Convention cheered with approval as Mr. Gelineau hailed the Libertarian Promise to Michigan, the Party’s commitment to reform many broken Michigan government institutions. “Let’s Rise”, the Convention theme, seemed to match the sentiment building in Romulus. State Chairman Bill Hall, one of the longtime leaders of the party, seemed satisfied. “Michigan needs another major voice, and we’re committed to being that robust voice. Our team is ready to go.”

The Libertarian Party of Michigan nominated the following state wide candidates at their State Convention in Romulus on Saturday, August 25th. They will join 42 other Libertarian candidates on the general election ballot, who advanced after winning their primary election.

For up to date information on all things LP visit:  https://michiganlp.org