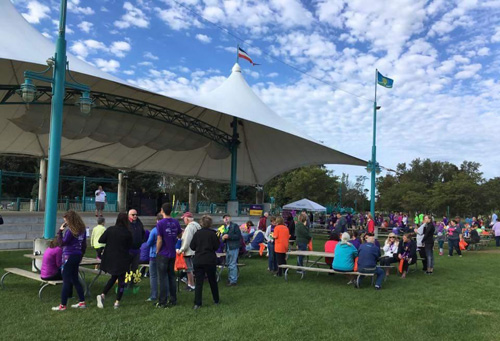 Muskegon, MI – More than 325 residents from the Muskegon area joined the Alzheimer’s Association’s Walk to End Alzheimer’s® and united in a movement to reclaim the future for millions on Saturday, September 24 at Heritage Landing. Participants raised more than $48,000 to fund Alzheimer’s care, support and research programs.

“With over 180,000 people in Michigan living with Alzheimer’s disease and over half a million caregivers, it’s a cause that has touched the lives of far too many Muskegon area residents,” says Elizabeth Donnelly-Johnson, Community Outreach Coordinator for the Alzheimer’s Association, Michigan Great Lakes Chapter. “I think that’s why the community really embraces it every year. It’s inspiring to look out at a sea of purple and know we’re making a difference.”

Walk to End Alzheimer’s participants did more than complete the one or three mile Walk routes. They learned about Alzheimer’s disease and how to get involved with this critical cause, from advocacy opportunities, clinical studies and support programs and services. The event also included an emotional tribute to those who have experienced or are experiencing Alzheimer’s.

Special thanks to Muskegon Hope Riders for being a Platinum Sponsor of this year’s event.

Alzheimer’s disease is a growing epidemic and the nation’s sixth-leading cause of death. As baby boomers age, the number of individuals living with Alzheimer’s disease will rapidly escalate, increasing well beyond today’s more than 5 million Americans to as many as 16 million by 2050. For more information or to make a donation, visit alz.org/walk.