New kiosk locations include many Kroger and Meijer stores 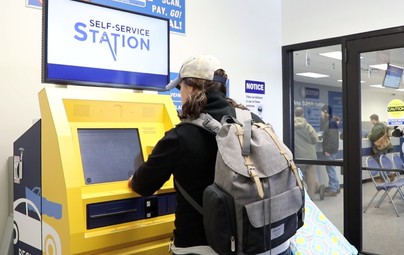 LANSING, January 16, 2020 – Customers have successfully completed more than 100,000 transactions on the new self-service stations that have been installed since Oct. 27, Secretary of State Jocelyn Benson announced today.

The 100,000th transaction in the program was completed at 9:23 a.m. Tuesday on the kiosk at the Brownstown Township branch office in Wayne County when Kevin O’Hagan of Lincoln Park renewed registrations for his truck and his wife AnMarie’s vehicle. He was pleased with the new technology he encountered.

“It went relatively easy and quick. I liked it,” he said. “I had a lot of trouble at the older ones.”

Outdated and unreliable self-service stations are being replaced statewide and many of the new stations are being placed in Kroger and Meijer grocery stores, meeting customers where they already are doing business. To date, 71 new machines have been installed. By the end of January, all 93 existing kiosks will be replaced and another 57 more will be added by the end of April, increasing the number of stations by more than 60 percent.

Most of the stations are available 24 hours a day, seven days a week. For an up-to-date listing of locations with the new self-service stations, visit Michigan.gov/SOSSelfService.