On 11/27/2013, officers from Fruitport Township Police Department were at The Lakes Mall regarding a shoplifting incident. While dealing with that incident, a female subject exited the same store into the mall, passing directly in front of uniformed police officers. Security devices attached to merchandise concealed inside her purse triggered an alarm. 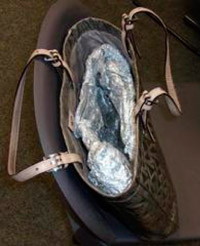 Foil lining in a purse

Officers confronted the suspect and recovered stolen merchandise from the store concealed inside her purse. Upon further investigation, officers discovered the suspect had lined her purse with tinfoil – which is often believed to interfere with the security devices being detected as the tagged merchandise passes through the sensors near the exit.

The suspect was taken into custody and lodged at the Muskegon County Jail. In Michigan, it is an additional crime to possess a coated bag, such as the foil-lined purse, intended to shield merchandise from detection by theft detection devices. 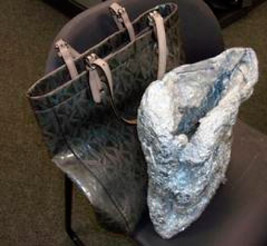 As of 11/27/2013, 291 shoplifting incidents (referred to by Michigan statute as Retail Fraud) have been reported to Fruitport Township Police Department. Police anticipate responding to several additional calls over the next few weeks for these types of incidents. In 2012, a total of 382 such incidents were reported in Fruitport Township.

During the busy shopping season, store security will be on high alert for shoplifters. Additional police officers on special assignment over the next few busy shopping days will dedicated specifically to the retail establishments.

Retailers use a variety of methods to deter shoplifting and apprehend shoplifters, including: uniformed and plain-clothed security officers, surveillance cameras, and anti-theft devices.

No further information regarding this incident, including the name of the suspect or the involved store, is being released by police at this time.