The chirps of birds. The squeaks of mice. The barks of dogs. In a world full of different sounds, our ears take in almost everything. But it takes more than just our ears to hear.

My friend Gail Chermak told me all about it. As an expert in speech and hearing sciences at Washington State University, she offered to give us a little tour of the ear.

She said animals with two ears have what scientists call binaural hearing. Binaural hearing helps us pick up sounds that might otherwise be hard to hear with all the noise in the world. Sound that comes at you from two sides is also an advantage when you need to figure out the source of a sound, particularly one that might be a sign of danger.

Let’s say you hear a kitten meow. Probably not too dangerous. But before your brain knows that you even heard a meow, the sound travels through the air as vibrations. The vibrations enter through the bendy part of your ear made of cartilage and skin.

The vibrations make their way through the waxy ear canal. That is, until they hit a roadblock: the eardrum. It’s a good kind of roadblock, though. The sound strikes the eardrum and it vibrates.

When the eardrum vibrates, it actually moves three tiny bones. One of them looks like a stirrup on a horse saddle. The stirrup rocks in and out of a tiny opening that leads into the inner ear.

This motion creates vibrations that move along a snail-shaped part of your ear called the cochlea. This is where you start to process things like the high pitch tweet of a bird or the loud barking dog.

The meow that came into your ear is no longer just a bunch of vibrations. You can understand that it is a meow and where it is coming from. Maybe the cat needs help. Maybe she’s hungry. Or maybe she’s meowing at something that you can’t hear. We cats are pretty good at picking up sounds outside the range of human hearing.

The animal kingdom is full of interesting ears. For example, jack rabbits in the desert use special circulation in their tall, thin ears to help them stay cool. Elephants can also use their big, floppy ears to scare away any potential predators. Ears can come in handy for hearing, staying cool, and keeping safe. They also help us with balance. But that’s a question for another time.

Keep sending in great science questions. As always, my friends at WSU and I are all ears. 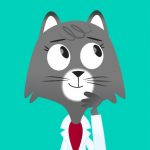 Ask Dr. Universe is a science-education project from Washington State University. Send in your own question at askDrUniverse.wsu.edu/ask.