by Kate and Calvin Holtrop

Since the beginning of the Fruitport Robotics program in 2008, its teams have already been involved in local, state, and world competitions organized by FIRST (For Inspiration and Recognition of Science and Technology), a non-profit charity started by inventor, Dean Kamen, which hopes to inspire and motivate young people to get more involved in science and technology related fields. The Fruitport high school team competed at a world level in 2016. The newer middle school team, improving in every one of its past four years, participated in the state championships last year. 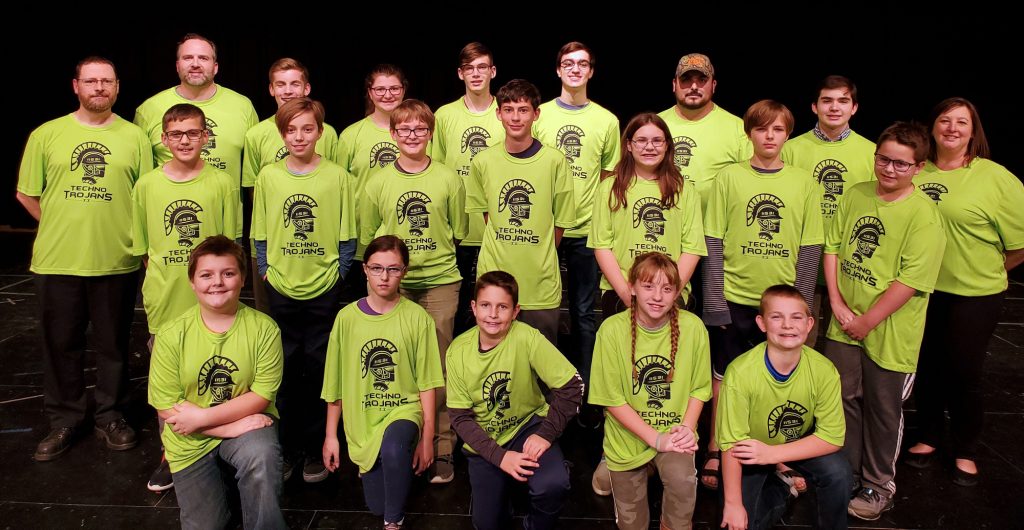 Fruitport Robotics teams are led by coaches, teachers, and mentors, some of whom are parents of team members. They guide teams of students who come from the Fruitport School District, as well as students from other public and private schools, and homeschools. Parents and kids can also be exposed to the robotics program through the team’s local outreach opportunities and events. “Part of the goal is, not just what we do to impact students right here in Fruitport, but how we impact the community,” said Coach Joe Hebert, of the high school Techno Trojans.

Techno Trojan leadership has set up an application time, similar to applying for a job, where they can meet with students who hope to get involved in a robotics program. The middle school team takes applications beginning in the spring, and they hope to start having meetings throughout the season to allow new members to join, since middle school students take shop classes that cover safety during their school day. In contrast, the high school team holds their application period in September. New members are not usually accepted after the application process is over, since it’s very difficult to add team members in the heat of a game season, and safety classes have already been done in the fall.

Because safety is so important to the leadership of Fruitport Robotics, students are trained in how to safely use power tools and equipment, and are required to use safety gear while they’re using those tools.

While sponsorships and fundraising pay for the high school team’s parts and tools, the team does charge a fee, $200 per student, to cover food, travel, shirts, and other necessities over the entire season. “We try to break that cost down, so that it’s truly covering their cost of what it would be to have them join the team,” said Coach Joe. However, there are no fees to join teams at the middle school level, which is a fully sponsor-funded team, though members of Techno Trojans II must buy their own team shirts. 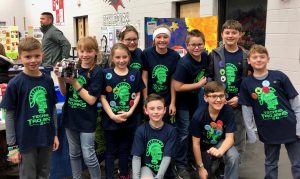 The middle school team has two large rooms in the Fruitport Middle School building, where they work and keep their tools. They have a fabrication set for customizing store-bought parts to fit their robot’s requirements. The middle-schoolers use Google Blocks, a Java-based system, to program their robots. Coach Kris Cole hopes that by next year his students will be able to use Java code for their programming.

While the new high school is being built, the Techno Trojans work temporarily at Edgewood Elementary School. Once the new school is finished, they will have their own robotics lab that’s right next to the school’s CAD and drafting lab. The high school team fabricates parts for their robots by using machines they have in their shop and getting help from West Michigan area partner companies, who make parts for them. Their programmers use the graphically-based programming language, LabVIEW, with their robots.

In the high school team’s robot design process, programming, electrical, mechanical, machining, marketing, industrial safety, engineering, and CAD designing combine in the building of the team robot. “There’s a lot of different disciplines that we take in here, that’s very much like running a small company,” said Coach Joe.

Their build season starts at the beginning of January, with the Internet broadcast of the season kick-off, where the year’s game is revealed. Then the six-week design and building process begins, in which the robot is designed in CAD, prototyped, constructed, and coded. In the final week before the competition starts, fine tuning is done and drivers are trained.

Throughout the high school team’s competition season, the intensity of the game and the time and commitment required to play are about the same as for other varsity sports.  Robots can take a lot of damage due to the competitive, contact nature of the sport, as well as the large size and high speed of the robots competing. Although outfitted with bumpers to minimize damages, the robots need repairs and the replacement of parts frequently during the competition season. 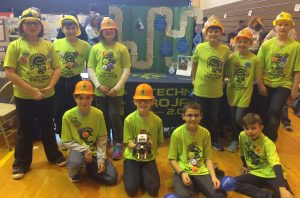 For the middle school team’s build season, students watch their kickoff video, as well as other robot videos for build inspiration. After finding out what tasks their robot must do, the team members draw up designs for what each wants to see in the robot, then pool their ideas to make a complete design. “We usually do the prototypes. And we come together as a team and put together all the ideas that we have,” said Tyler Carlson, of the middle school team. This year, the team is making their prototype using a base that’s the same dimensions as the robot, and they will develop pieces as they experiment so they don’t have to take time away from the programmers and drivers by experimenting with the actual robot.

The middle school team’s past robots include one that sucked up ping-pong balls, and one that carried a totem. This year’s robot is more complicated. It has a vision system with two cameras to identify pictures on blocks, and a claw arm to lift the blocks. With tighter restrictions on height, their robot will be fourteen inches tall, and will weigh forty-two pounds. When it’s done it should be able to move in almost any direction on its wheels.

The high school team has built numerous robots, including Ursa Major, which had to repair and load a space ship and a rocket ship. Other robots the team has built have played soccer, basketball, and frisbee, among other sports. All the robots are similar in size, and fit into the one hundred twenty-pound range. In recent years, targeting cameras, back-lighting, and cut-out designs, have been added, as well as bolder LED lighting schemes, which have made Fruitport’s robots more attractive.

“The LEDs, they’re pretty to look at, but they’re also functional,” said Coach Jeremy Martinez of the Techno Trojans. He explained that when the robot picked up an object, the LEDs would change color to show the drivers what was happening. “Usually the programmers try and add some kind of functionality to the LEDs, along with their aesthetics.”

The team hopes to use LED schemes and other new, more sophisticated components to enhance their robots’ autonomous programming in future years, through partnerships with General Motors and NASA.

Fruitport Robotics coaches and students have favorites among the robots they’ve built. The high school students usually like the robot they build in their senior year best, since it’s the one they put the most effort into. The middle school students like robots that do cool things, like drifting and moving fast. Most of all, they love robots that work and are easily controlled.

“Having a robust robot that’s always in the competition, is in there every single match, and is competing strong, I like that more than anything,” Coach Joe said.

“I guess for me, going back to 2012 was probably my favorite robot that we had. That was a basketball competition. And, it was a great design,” said Coach Jeremy. 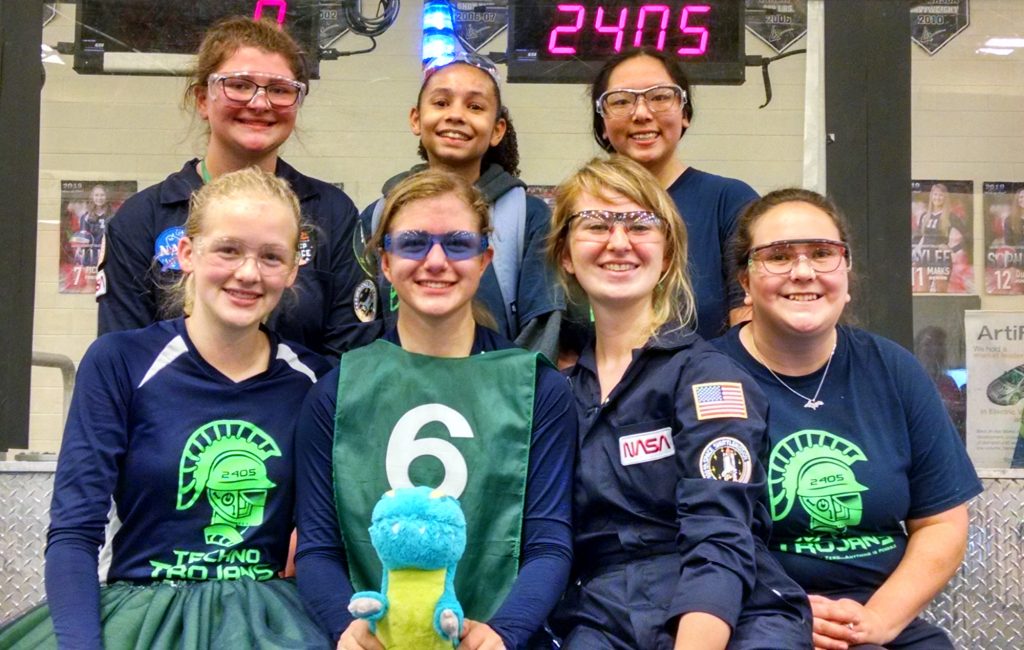 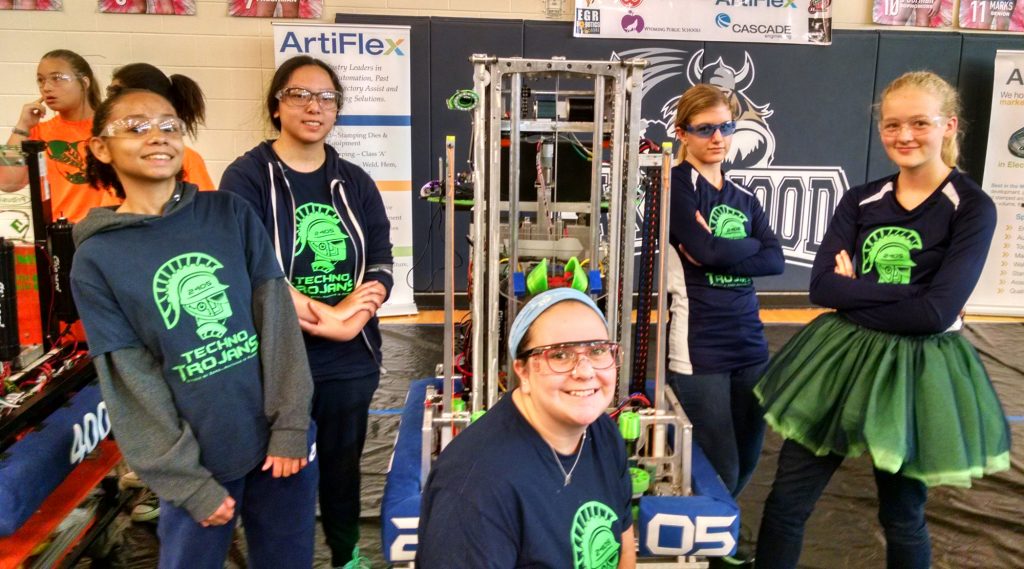 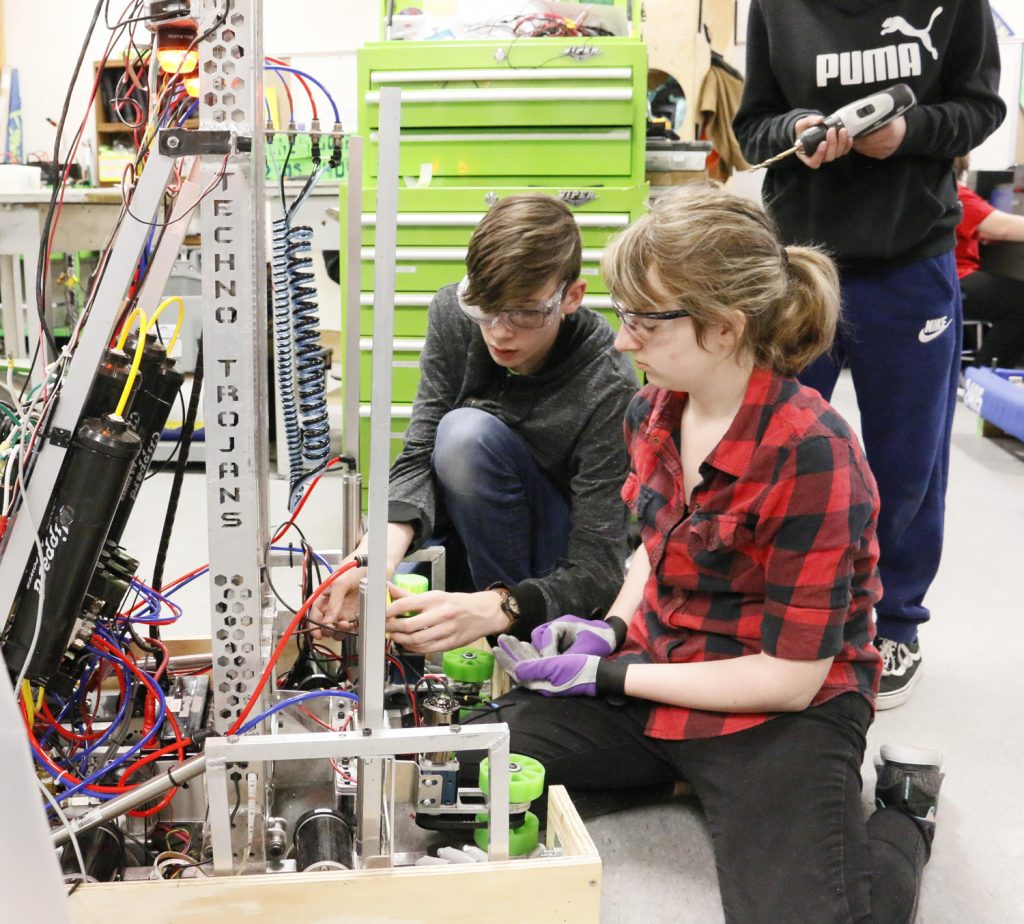 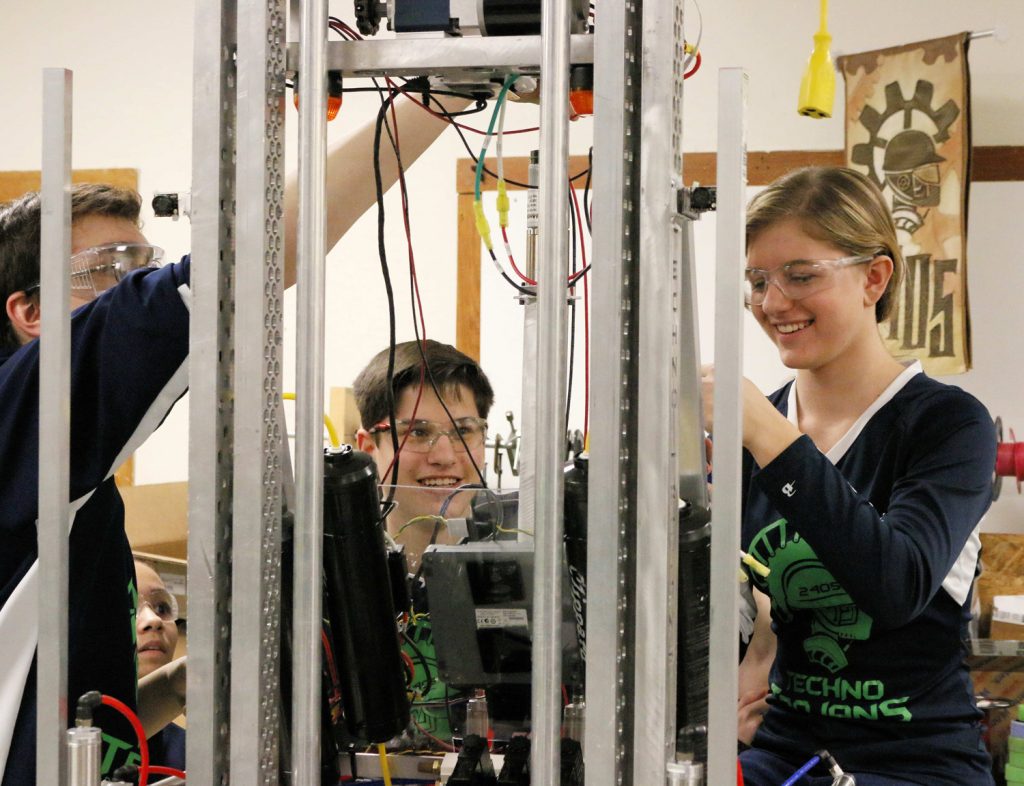 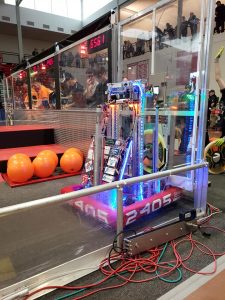 The students learn many good skills in the Fruitport Robotics program, and they aren’t shy about telling the community what an incredible influence the program is in their lives. “All of us are kind of learning different things at the same time,” said middle school team member, Kiera Cole, who explained what her teammates were doing with their robot’s programming and building, as well as working with their team’s media outreach.

The team’s performance, in terms of how teams compete with each other and how team members interact, is very important to their team leaders and to FIRST Robotics.

There are two key terms that FIRST wants to talk about, according to middle school Coach, Kris Cole. “Gracious professionalism: Being good sports–it’s…good sportsmanship. Coopertition: So, while we are competing, we also help each other, help other teams.”

Kids are encouraged to learn from their failures as well as their victories, and to always persevere. “Mistakes are proof that you’re trying,” said Jaden Baxter, of the middle school team. And Cole DeRuiter, also of Techno Trojans II, said, “Never stop trying if you feel like quitting.”

The Fruitport Robotics program and FIRST Robotics teams have impacted many students in STEM fields (Science, Technology, Engineering, and Math) over the last eleven years, showing how communities can come together to build knowledge, experience, and good skills and values into future generations of kids in the Fruitport area and beyond.

As they state on their website, fruitportrobotics.org, “FIRST Robotics is the catalyst to excite our students to seek out new challenges and learn new concepts that will propel them into today’s technologically driven world.”