A Brief History:
The Elliott-Larsen Civil Rights Act prohibits discrimination in Michigan on the basis of “religion, race, color, national origin, age, sex, height, weight, familial status, or marital status” in employment, housing, education, and access to public accommodations. After passing both the Senate and the House, it was signed into law by Michigan Governor William Milliken in 1977. 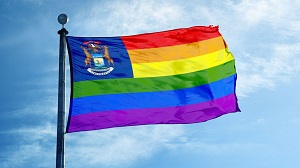 Members of the LGBT community sought, unsuccessfully, to be included in the Elliott-Larsen Civil Rights Act while it was still in committee hearing (1973); and since Elliott-Larsen’s passage, several additional bills have been introduced to add protections for the LBT community—all of them unsuccessful. To read more about this history click here. To read the law itself, click here.

Currently:
A group of activists and businesses are promoting The Fair and Equal Michigan ballot initiative. If passed, this would re-define the word “sex” in the Elliott-Larsen law to include “sexual orientation” and “gender identity or expression”, effectively extending this law’s protections to the LGBT community. It would also define “religion” to include the religious beliefs of an individual.

While we certainly do not encourage discrimination against any group of people, neither do we, as Christians, want to bring us into a position where we are more easily discriminated against.

It’s no surprise that Governor Whitmer supports this endeavor; gratefully there are those in our system of government who are standing against this push.

Bridgemi.com reports: “House Speaker Lee Chatfield, R-Levering, has questioned the need for LGBT anti-discrimination protections and won election in 2014 by defeating a Republican incumbent who had introduced gay rights legislation.

“‘I do not believe we can pass this law while still protecting religious freedom,’ Chatfield said last year on WKAR-TV’s ‘Off The Record.’

“‘You’ve seen these laws passed in other states where what happens, in my opinion, is a reverse discrimination against those who have religious beliefs.’”

House Speaker Chatfield was also quoted by mlive.com as saying, “I probably would not allow a bill to come up that I believe would infringe on religious freedom.”

“Personally, I don’t believe people should be discriminated against,” he said. “But at the same time, I’m never going to endorse a law or allow a bill to come for a vote that I believe infringes on someone’s ability to exercise their sincerely held religious beliefs.”

What can we do? :
Fair and Equal Michigan is in the process of obtaining the 340,000+ signatures needed to place this initiative on the ballot. If they are successful, and it is likely they will be, we need to mobilize to defeat it at the ballot box. As stated above, if passed, it will eliminate religious liberty as we have come to know it.

The Family Research Council (FRC) asks that those who care about religious liberty do the following:

1. Get the word out to those in your networks about this proposal.  For you pastors, gather two or three others in your area and hold a press conference announcing your opposition and reasons.

2. They have established a Facebook page called “Michigan Families Voting No to Discrimination”.  Please go to the page, like it, and share it with your friends.  They’re using the page to post important resource information about the issue.

3. They also ask that if you lead a group, please strongly consider issuing a press release announcing your opposition to the proposal.

A further word from FRC Michigan:
Working together, we can defeat this and insure our religious liberties and the ability to preach the full counsel of the Word of God remains intact.  When the church shows up, we win!

We at American Decency Association urge you to be earnestly praying over this and the many other issues that we face in this upcoming election. Pray that God will rule and overrule and that He will bless us with His grace to handle each and every outcome. These are times that require a steadfastness that only comes from knowing intimately the God of the Bible and His Word. May we constantly walk in discernment and wisdom, truly ending up on the right side of HIS story (history).