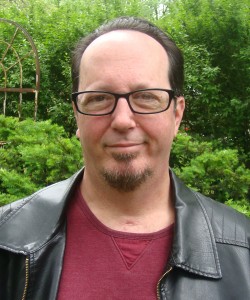 What is the real life value of comic books and the heroes in them? This question is explored in Number One, a full color, done-in-one-issue story looking at 50 years of comic book history through the life of one comic book retailer.

Written by local comic book creator, Gary Scott Beatty, and illustrated by Adventures of Aaron creator, Aaron Warner, Number One brings readers through decades of comic book history and provides a short Guide to Illustrated Stories. “I put comics in historical context, from Gilgamesh, to The Adventures of Mr. Obadiah Oldbuck, to Free Comic Book Day,” Beatty explains. “Number One is a complete package explaining, in an entertaining way, our hobby and our passion for it.”

“Steve, the comic shop owner character in Number One appealed to me as it will surely appeal to small business owners everywhere. He found a business he loved, built it on customer service and hung on through the lean years,” said Beatty. “I think we’re all more informed about how difficult it is to operate a local business these days, since the recession of 2008.” 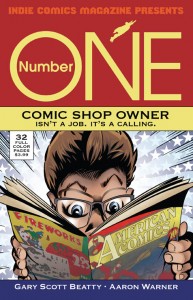 “Comics helped Steve through some tough times growing up and he turned his love of the medium into a comic shop business. In Number One we see whether operating the business is worth the toll it takes on his family.”

“I set out to write a story that, in an personal way, can explain to those outside our community why we love comics,” Beatty said.

Published by Beatty’s Aazurn Publishing, pre-orders are in for Number One and interested readers will be able to find it at their local or online comic shop the first of September. “Aazurn Publishing is an indie publisher, so they’ll have to ask for it!”

Over the past 40 years, Gary Scott Beatty has built small press publications at local newspapers, ad agencies, and printing houses, including the publications On the Shore, and Muskegon Magazine.com. Beatty also produces Indie Comics Magazine, featuring work by a variety of talented writers and artists, both veterans of independent comics and newer creators. He regularly deals with creators from New York, Florida and California as he colors and letters for the comic book industry. For more information, visit: garyscottbeatty.com