Upon discharge from the surgery center, Mr. Homan went immediately to Shoreline Inn & Suites in downtown Muskegon where a special suite with 24/7 nursing and physical therapy services awaited him and his family. A contractual agreement between Muskegon Surgery Center and the hotel gives knee replacement patients the option to stay at Shoreline Inn in a designated recovery suite with a family member for one or two nights before returning home. Nurses administer to patients hourly, and physical therapy takes place in the patient’s suite overlooking Muskegon Lake, which also includes an ADA bathroom, a recliner, and a separate bed and TV for the accompanying family member.

“This is my fourth joint replacement surgery, and I’m amazed at how well I’m doing just one day after my procedure,” said Mr. Homan.  “I have had absolutely zero pain, and I’m already bending my knee at a 90⁰ angle.  I believe this is due, at least in part, to my being able to recover in such a comfortable, quiet environment.  It’s different than a hospital where the staff is working at a very fast pace.  Here, my wife is my roommate, not another patient.  It’s an ideal arrangement for both of us, and I have no doubt that these surroundings are having a positive impact on my mental outlook, which is allowing me to heal faster.” 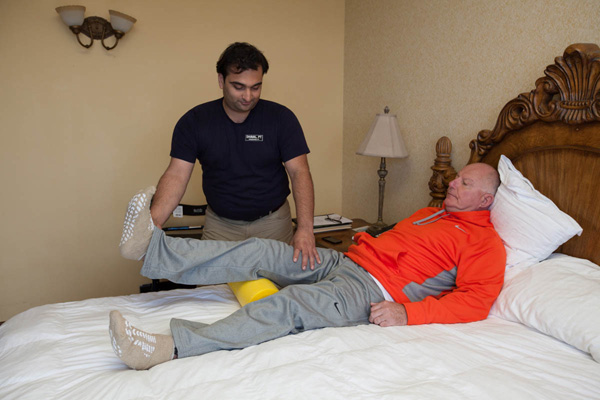 According to CEO Julie Greene, preparations to perform total knee replacements on an outpatient basis at Muskegon Surgery Center have been in the works for almost two years. “The first thing we had to do was get approval from insurance companies to pay for the procedure,” she said.  “We now have agreements with Blue Cross/Blue Shield of Michigan, Blue Care Network, Priority Health and United Healthcare. The cost for inpatient knee replacement varies. However, we are confident that when the same procedure is done on an outpatient basis, the cost savings for the insurance company and the patient can be significant. We are also willing to negotiate rates with companies with self-funded healthcare plans so their employees can have access to this program. This is now a viable option for anyone from West Michigan who is leading a healthy, active lifestyle.”

An article in the October/November issue of AARP Magazine reported that the average cost for knee replacement surgery in the U.S. is approximately $34,000.  Muskegon Surgery Center’s cost is less than half that amount. Historically, surgery centers have also reported lower infection rates, higher patient satisfaction, and lower co-pays than inpatient facilities.

“The Muskegon Lakeshore Chamber of Commerce also played an important role in bringing Muskegon Surgery Center and the Shoreline Inn together for this agreement,” added Greene.  “We anticipate that this will be a draw for people from outside our area who want to have their surgery done on an outpatient basis.  It’s a great example of how two seemingly very different businesses can work together to positively impact the community.”