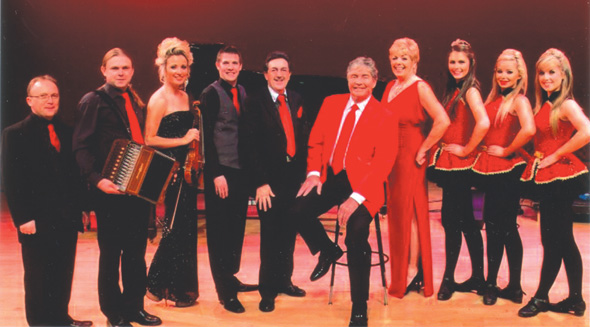 A very special holiday show, Tony Kenny’s “Christmastime in Ireland” will take place at the Frauenthal Theater on Saturday, December 13th, 2014 at 7:30 PM. Tony Kenny is an icon in the world of Irish music receiving dozens of awards for his stage and television appearances. He has entertained over 2 million people across the United States on countless tours to packed theaters.

This multi-talented, award-winning performer has done it again and is introducing some of Ireland’s finest performers in his latest show: Tony Kenny’s Christmastime in Ireland. This show is planned to give the audience an Irish Christmas experience with a rousing sing-along, favorite Christmas songs and hymns, laughter as everyone gathers for a sampling of Irish wit and wisdom, and the joyfulness of youthful dancing in celebration of the holidays. Tony Kenny last appeared in the Frauenthal Theater seven years ago with a wonderful show.

Ireland’s King of Blarney, George Casey’s self-deprecating humor and Irish brogue have won over audiences around the country. Casey’s humor is always good fun and put a smile on the face of even the most politically correct person.

Kathy Durkin is one of Ireland’s leading female entertainers and 3-time Irish Recording Artist of the Year. Her version of “The Working Man” spent an incredible year on the Irish charts and was voted best song in Ireland.

The Dublin Trinity Band is one of Ireland’s best folk bands. This group has played the National Concert Hall and has been entertaining audiences for years.

The Dublin City Dancers are led by Sarah Costello who toured the world for six years as lead dancer and dance captain in world renowned Irish dance shows in Walt Disney World for 16 months before opening an Irish dance school in Orlando. Joining Sarah is Maggie Darlington, fresh from touring the world with Riverdance. Also performing, Ethan Walker is an original cast member of Michael Flatley’s Celtic Tiger and Lord of the Dance.

All proceeds from this concert are to benefit the Boys and Girls Club of the Muskegon Lakeshore.