Attention college graduates, Muskegon has “Hot Jobs” available! To send a message out to the young people that will be home visiting during the holidays, the Muskegon Lakeshore Chamber of Commerce has partnered with Michigan Works! Muskegon-Oceana and Downtown Muskegon Now to promote Muskegon County’s Hot Jobs List.

“Even though we’ve made great economic strides over the last few years, there’s still a belief out there that there aren’t jobs in Muskegon,” said Brittany Lenertz, Community Relations Manager for Michigan Works! Muskegon-Oceana. “The truth is that there are a lot of great skilled jobs that employers are looking to fill.” 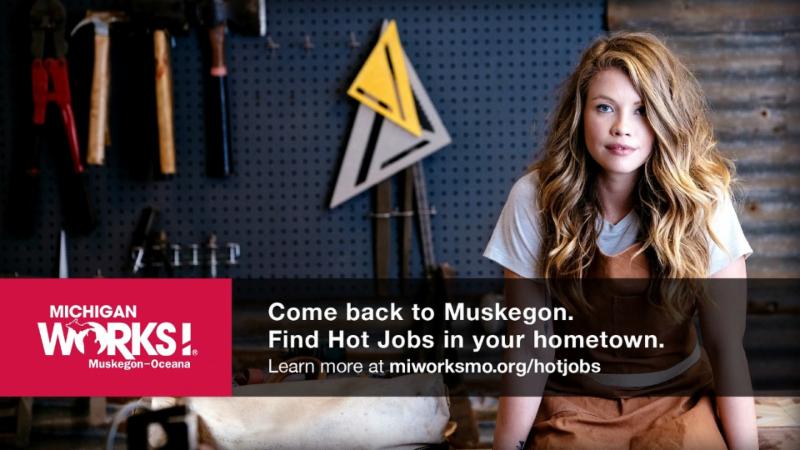 The Hot Jobs publication is published every six months so the community can see the types of positions employers are hiring for. “Hot Jobs” table top tents are being delivered to area bars and restaurants in time for one of busiest weekends of the year. The table tents have a QR code on them directing people to download the Hob Jobs list published on the Michigan Works! Muskegon/Oceana website.

During this same time, the Muskegon Lakeshore’s quality of life video will be shown at the Frauenthal Theater prior to the Warren Miller film Saturday night. The Warren Miller debut is one of the popular activity’s during the Annual Holiday’s in the City celebration where thousands flock to the Downtown and Lakeside area’s for small business Saturday shopping, entertainment and the annual lighting of Hackley Park.

“It’s all about building awareness and spreading the message that people can find jobs in their own hometown,” adds Cindy Larsen, President of the Muskegon Lakeshore Chamber of Commerce. “We need to get people to take a second look at Muskegon and see that there are great things happening along the lakeshore.”

ABOUT THE CHAMBER
The Muskegon Lakeshore Chamber of Commerce is the premier business membership organization on the lakeshore representing approximately 1,150 businesses and organizations. The Muskegon Chamber represents businesses of every size and type all over West Michigan. The Chamber is celebrating 120 years in operation working to sustain an environment for business success through community leadership, promotion, inclusive business advocacy and valued member services. The Muskegon Chamber is a three-time award winning Chamber, being named Chamber of the Year for the State of Michigan in 2006, 2010, and 2012 by the Michigan Association of Chamber Professionals.