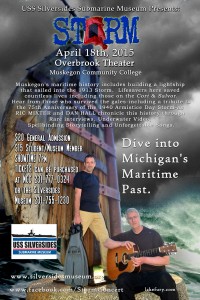 Attend the Overbrook Theater on April 18, 2015 for the presentation of STORM, a video documentary about storms on the Great Lakes and resulting ship wrecks with all the mystery and theories surrounding their demise.  Ric Mixter, the videographer and researcher who created the film will narrate the stories shown in video and photograph.   Accompanied by musicians who sing nautical ballads, the evening will be one of nautical history and entertainment.  Having personally seen and listened to the program last September, this will be rare opportunity for residents of West Michigan to view underwater footage and listen to the stories that accompany the nautical environment we experience daily.

Of special note will be a focus on ships that have sunk during storms near Muskegon, Whitehall, Grand Haven and Pentwater.

ONLY ONE SHOWING AND SEATS ARE LIMITED