Muskegon, MI, April 8, 2015 – Big Brothers Big Sisters of the Lakeshore is proud to announce that local mentor Tom Hickman has been named Michigan’s 2015 Big Brother of the Year. Each year, mentors from across the state are nominated by local Big Brothers Big Sisters agencies for their commitment to changing the lives of children facing adversity – for the better, forever. Hickman has been a Big Brother for 5 years and has dedicated countless hours to helping his Little reach his fullest potential. 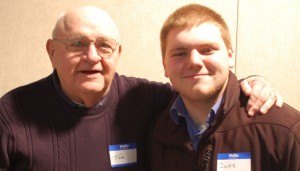 “Jake knew that he wanted a positive male role model in his life, so he took the initiative after hearing a presentation at school to go to his teacher and get the agency contact information himself. That shows how badly these young men want mentors in their lives” stated Big Tom Hickman in a recent letter to the agency. “Our relationship has developed over the last five years we’ve been together. The Big Brothers Big Sisters program says you should get together at least two times a month. Jake said you cannot develop a relationship with only two meetings a month, so we meet once a week or more. If Jake is involved in any activity I enjoy being present. We will spend day-long activities (athletics, movies, parks, library) but a great deal of the time is spent just talking for a couple of hours about what he and I have done that week, and what will be going on the following week. At other times he will call and suggest he wants to speak to me about a concern.”

Jake’s mother Ann states “Jake has come a long way since 2010. Not only has he strived to be the best student, making honor roll all of last year, he puts his all into sports, his teammates, his friendships and in life itself. He has helped others achieve goals, mentoring another young friend, encouraging him to get into sports and he’s been playing ever since. I’m very proud of my son and all of his accomplishments.”