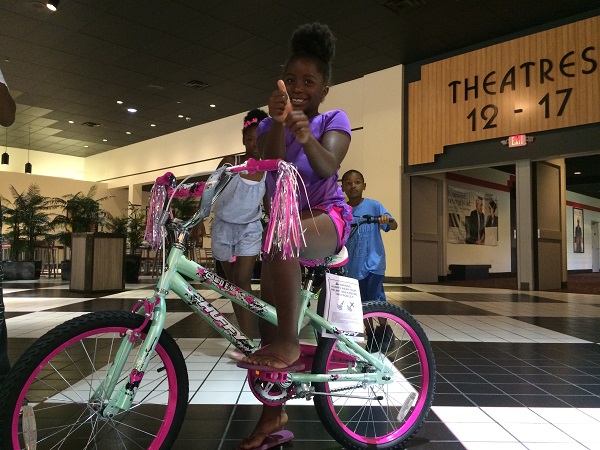 Muskegon, MI  –  Twelve members of the newly established Boys & Girls Club of the Muskegon Lakeshore received a big surprise on Wednesday afternoon. Celebration Cinema and Family Fitness of Muskegon teamed up to give new Huffy Bicycles to twelve Muskegon youth who attend The Boys & Girls Club. Their goal is to assist the youth in their health, and to give them the ability to commute from home to the Club which is located in Nelson Elementary School. Boys & Girls Clubs across the state are teaming up with a program called Healthy Michigan Today and the donation of these bikes fit directly within it. This program aims to promote healthy lifestyles for Boys & Girls Club members and their families through statewide implementation of Triple Play, BeFit Festivals and Health Screenings.

The twelve youth and family members were under the impression that they would be attending solely to watch a free movie, donated by Celebration Cinema. Once the movie ended Club Staff Member TJ Chappel led the group towards the bikes to reveal the secret. Representatives of Celebration Cinema, Tim Luce, Scott Goetz, and Craig Tyson announced that each of the 6 girls and 6 boys attending that day would take home a free bike!

The youth members who received free bicycles were chosen by Boys & Girls Club Staff based on criteria consisting of behavior, attendance, and academic improvement over the summer months at The Boys & Girls Club. Staff Member, TJ Chappel stated “The members we chose to receive the bikes dates back to our opening day in April and understanding those who could most benefit from having their own bike. The whole day was a buildup because the kids had no idea. It meant everything to me when we were finally able to give the kids their bikes. They deserve them!”

The Boys & Girls Club of the Muskegon Lakeshore opened doors on April 20, 2015 after 15 years of preparation and fundraising. Their mission is to inspire and enable all youth, especially those who need us most, to reach their full potential, as productive, caring, and responsible citizens.

For more information, contact Dakota Crow at 231-798-5048 or info@bgclubmuskegon.com.