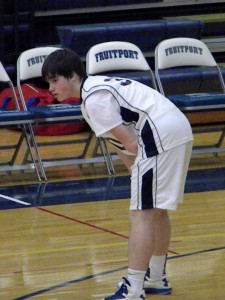 Karson Kriger play basketball on the Fruitport freshman team. He also plays football, baseball and enjoys out door sports like fishing and hunting.

Karson Kriger has the will and the desire to succeed.

Karson Kriger plays basketball on the Fruitport freshman team. He also plays football, baseball and enjoys out door sports like fishing and hunting.

The freshman on the Fruitport High School freshman basketball team has had a challenge his whole life.

Kriger was born with no circulation in his upper arm. The lower part had to be amputated shortly after he was born. But yet he makes the catches, dribbles with his right hand and tosses in 3-pointers one-handed.

Despite some limitations, feeling sorry for himself has never been a part of the 14-year-old’s vocabulary. He has shown the desire to attempt every single activity any young person could undertake.

“Karson should be lifting more to make himself stronger,” Ken Kriger, Karson’s father, said.
And the only limitation Karson sees in that statement has nothing to do with his arm.
“But I tell my Dad, I just do not have enough time for lifting,” Karson said.
Karson also has been involved with wrestling. From ages 9-11, he wrestled for the Fruitport Youth Wrestling Club and for the Michigan Youth Wrestling Athletic Association.
So what drives this tough kid from a solid family to want to succeed at all of these activities? The biggest factor is his family, which includes Dad, his mom (Kristi) and his younger sister, Katlyn.
Following his adoption from Bethany Christian Services, Karson was always treated like any other son from any other family.

Karson Kriger sports a prosthetic arm which enables him to bat in baseball. The Fruitport freshman anticipates being a consistent contributor for his Trojans this Spring. 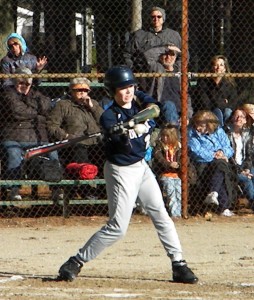 Karson Kriger sports a prosthetic arm which enables to him to bat in baseball. The Fruitport freshman anticipates being a consistent contributor for his trojans this Spring.

“My mom and dad never babied me,” he said. “They kept me going to try harder. I usually can hear my dad encouraging me in the stands, but I try to tune him out. That’s because my coach says stay focused so I do what he says.”

“As a parent of a limb different child, we have had some ups and downs,” she said. “Karson has rarely had days where he feels sorry for himself, and those days were from frustration with struggling to figure out how to do things ‘his way.’ Other kids have been supportive of Karson as well, but still, his one arm is out of the ordinary,” Kristi said.There was one incident she recalls from when Karson was three years old.

“He fell off a stool and broke his ‘nub’ arm,” Kristi said. “Because it was a hair-line fracture, his arm was in only a soft cast. While at a local park, another child asked Karson what had happened to his arm. Karson nonchalantly told the boy that he had broken his arm. The boy’s eyes became as big saucers. I realized, he thought Karson had completely broken his arm off.”
Karson is quick to state that his coaches also have helped him to succeed.

“My coaches, Grimm in basketball and (Dean) Six and Coach (Greg) Vargas in football have really been big encouragers for me in sports,” Karson said.

One of his more rewarding experiences came from attending a three-day Nubability Camp in DuQuion, Ill., last summer. 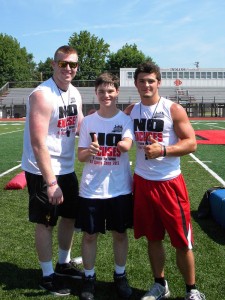 They taught all the sports for grades 4-11. But for Karson, he quickly realized something really important.

“I found out at the camp that there were not only many like me, but also found that there were many who had worse conditions and limb differences than me,” he said.The camp’s creed is “to encourage, inspire, and instruct congenital and traumatic amputee kids who want to get out of the stands, off the bench, and into the game.

“I think the camp was great because it encouraged everybody to give your best shot. The older counselors really helped me,” Karson said.

Being confident beyond his 14 years, Karson quickly found he can be a huge encouragement to others.At Mary Free Bed Hospital, where he has received medical assistance, he met a family who asked for his advice.

“The family had a daughter with a limb difference, like me, and wondered if she should play sports. The parents had reservations, but I said, basically, to keep your daughter in sports and she will have friends and it will teach her to never give up and she will have coaches that she can trust,” Karson said.

Baseball is his biggest love and Karson, like most boys, wants to play major-league baseball. He smiles as he relates one of his favorite baseball experiences.

“I struck out a friend of mine three times in one game,” he said. But then he was quick to point out that he also “struck out the side, but walked four batters.” 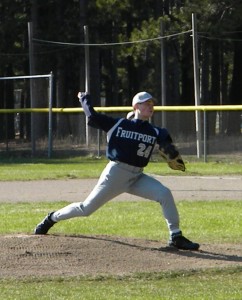 Kriger wields back to throw a strike. The Fruitport freshman has a first love for baseball and looks to former MLB pitcher Jim Abbott for inspiration.

“He has a prosthetic for batting and it is quite remarkable watching him,” Reed said. “He is going to be a main contributor on the freshman baseball team. He is really accepted by his teammates and his parents push him and do not put restrictions on him. He is a great kid.”
Karson also is signed up to play for West Michigan Riptide, an elite travel team, this summer.

He’s had the unique experience of meeting former major-league pitcher Jim Abbott, who also is limb different. Abbott was a left handed pitcher who played for the University of Michigan and then for four major-league teams including the California Angels and the New York Yankees.

Abbott overcame his condition with hard work and then wrote a book entitled, “Imperfect. An Improbable Life.” At a book signing in Grand Rapids 2 years ago, Karson was able to meet him and was granted 5 minutes of Abbott’s time.

“He encouraged me and that has meant a lot to me and my parents,” said Karson. He also had his picture taken with Abbott. And, he received advice about being careful about batters who like to gain an advantage by lay down bunts.

“I am ready for bunters because I have my glove off already when fielding a bunt,” he said. “If opponents try harder against me I do not care.”

Karson also relies on prayers and faith to encourage him through his sports experiences.
“I believe in God and other people and that helps me to do the job,” Karson said. “I know God is watching over me, and if it is a close game, the fans help as well.”

He is presently going through confirmation at his church, Fruitport Congregational United Church of Christ. 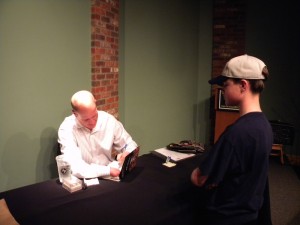 For others in similar circumstances, check out the Nubability Camp and the “Lucky Fin Project.”

It is a good resource for individuals with limb differences. Their motto is “Ten Fingers are Overrated” and it is run by Molly Stapelman in Royal Oak.