“Proceeds from the 2015 Bike Time Calendar Contest Made Donation Possible”

MUSKEGON, Mich., April 12, 2016 – Muskegon Bike Time, a four day annual celebration of motorcycles and the people who ride them, has announced another charitable donation – this time to Habitat for Humanity. The $1000 donation will be used to support the mission of Habitat for Humanity, which is to bring people together to build homes, communities and hope.

The Bike Time donation comes as part of a partnership with Habitat for Humanity, to use the proceeds from selling of 2016 Bike Time calendars. The calendars feature 12 different winners of a competition held at Bike Time 2015. Winners of the contest were selected by a panel of judges. The contestants ranged in age from 18 -57 and include men and women who were photographed with their bikes, in unique locations connected to Bike Time and the surrounding area.

The calendar contest was the brain child of Bike Time volunteer, Cari Draft from Eco Trek Fitness in Muskegon, MI. Cari had been involved in organizing past Miss Bike Time contests and wanted to take the concept to a new level, while creating an opportunity to raise funds for charity.

“We are so pleased with our relationship with Bike Time and happy to accept their donation on behalf of the good work we do in the community,” said Ashley Fleser, Executive Director at Habitat for Humanity. 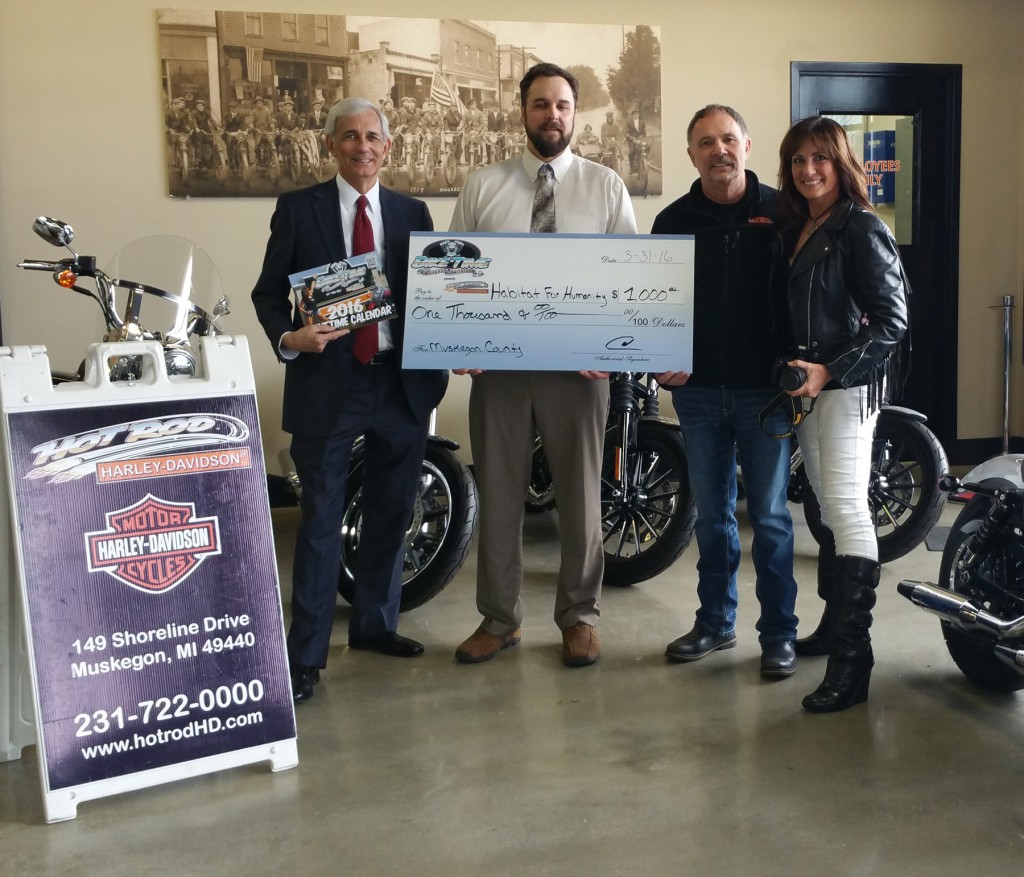 Muskegon Bike Time is a 501c3 nonprofit organization that has supported over 20 different charities and provides a $30 million boon to the local economy.

For more information on Muskegon Bike Time, please visit our website at www.muskegonbiketime.com.

The mission of Muskegon Bike Time is to produce entertainment opportunities in Muskegon aimed at attracting a broad spectrum of motorcycle enthusiasts for a vacation experience on Michigan’s West Coast. It is a 4 day annual celebration of motorcycles and the community held the third weekend in July. The festival attracts motorcyclists and the general public for its spectacle, attractions, entertainment and food. Muskegon Bike Time is a 501c3 nonprofit organization that has supported over 20 different charities and provides a $30 million boon to the local economy.