Your Muskegon Lakeshore Chamber of Commerce is one of the top three chambers in the United States of America!

Chamber President, Cindy Larsen and Communications Director, Cece Riley spent this week in Savannah, GA representing Muskegon at the Association of Chamber of Commerce Executives Annual Convention. Cindy and Cece both completed the final task of a Chamber of Year Finalist, being interviewed by a panel of judges. They also attended multiple training sessions, learning valuable information to bring back and implement in Muskegon. 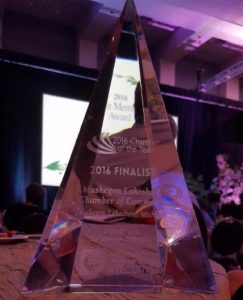 To be named a Chamber of the Year Finalist and be considered one of the best three chambers in the country is something to be very proud of. Board Chair Larry Hines said, “We have an extremely dedicated group of employees that work at the chamber, but what really makes the chamber work, like a lot of non-profits is all the volunteers.”

The winner was announced on August 10 at about 7:30 PM. Your Chamber was competing against Vail Valley Partnership, who won 2016 Chamber of the Year, and The Greater Springfield (OH) Chamber of Commerce.