By Lin and Kaerlyn Holtrop 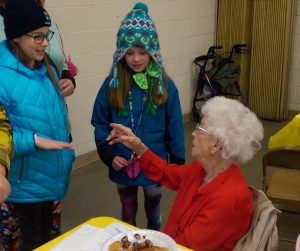 Renovations for this post-Civil War era schoolhouse began in early 2015, with Jim Fitzpatrick and Jim Key spearheading the project. They are hoping to have it done soon so Ruth can see it in her lifetime. “I would love to see South Evergreen School come so I can go over there, sit and reminisce and think about all the teachers we used to have,” she said in an interview with Fox 17’s Brody Carter. One memorable teacher was Miss Rankins, whose father had a music store on Main Street in Coopersville, and sold Victrolas.

After the Civil War, local area families knew the community needed some improvements; one of those improvements had to be a school. Four families in Polkon Township got together and talked with neighbors about starting a school. About two years later, a one-room schoolhouse opened on the corner of 88th Avenue, and what was then River Road (now Leonard Road). The first teacher was Fanny M. Wilson, a resident of Spring Lake, whose brother was son-in-law to one of the school’s founders. When the school finally closed in 1958 or 1959, all its students were sent to the Eastmanville Schoolhouse.

Some of Ruth’s best memories were at South Evergreen. She was 7 years old when she started school and went there through 8th grade, the highest grade taught in most one-room schoolhouses. “Even when I go by there, I think, ‘That’s my home.’ I’m glad they’re fixing it up,” she also told Carter. Ruth and her seven siblings all attended South Evergreen. “They took real good care of us.”

The South Evergreen Schoolhouse Committee worked for over a year to raise the $20,000 necessary for Polkton Township to buy the property. After the purchase in early 2015, they began the work by repairing the roof, which included removing the belfry and replacing the old shingling. The following summer, the work continued with replacing broken siding, repairing the bell tower and flagpole, and scraping and repainting the exterior, which took through the end of the year. In early 2017, they received one of the school’s original outhouses from a local couple who had used it as a garden shed. The interior work is still in process.

Fitzpatrick and Key have high hopes for the future of the schoolhouse. Once finished, the schoolhouse property will function as a bicyclist waypoint for rest and exploration, with bike racks, water stations, picnic tables, and restrooms. Tours of the schoolhouse will be available for visitors, and the Committee will work with school districts to provide students with an authentic one-room schoolhouse experience. These Living History classes will include genuine antique desks, chairs, tables, a piano, and a pot-bellied stove, just like “a day in 1867.” The schoolhouse will also be a site for festivals, reunions, and other events.

A 150th Anniversary party is planned for this fall. There will be live music, arts and crafts vendors, and food. The Committee hopes that Ruth will be able to attend as well.

To learn more about the restoration project, visit the South Evergreen website at http://www.nunica.com/schoolhouse/. The website also includes more information on the history of the school, updates on the renovation progress, and stories from past students and teachers. There is also a GoFundMe campaign where interested parties can help the project reach the goal of $50,000 toward renovation (https://www.gofundme.com/south-evergreen-schoolhouse).

In the words of Ann Spinner Sabo-Jonick, a former student of South Evergreen School, “It was just a one-room school, but it was a place where a lot of us learned how to become outstanding, good citizens. We learned how to respect one another, and we learned how to make just a little positive difference in this great country of ours.”