This program is one in a series, at the Muskegon Museum of Art, that accompanies the exhibition Edward S. Curtis: The North American Indian. Special programs continue in August with:
• Standing Rock: A Report from the Field by Levi Rickert
Thursday, August 10, 5:30 pm Reception, 7:00 pm Lecture
Levi Rickert, editor of Native News Online, a national publication of, by, and for the indigenous peoples of North America, will talk about his recent experiences at the protests at Standing Rock in North Dakota.
• Native Storytelling Super Saturday
Saturday, August 12, 10:00 am – 3:00 pm
Free Family Fun Day. Explore Native stories with special activities. Free admission and activities.
• Film Screening & Lecture: Coming to Light with Anne Makepeace
Thursday, August 24, 5:30 pm Reception, 7:00 pm Film Screening & Lecture
Screening of Coming to Light, Edward S. Curtis and The North America Indians, followed by Q & A with Anne Makepeace, the film’s writer, director, and producer. Coming to Light was an Academy Award finalist for best feature documentary in 2001.

The North American Indian is an exhibition of national significance that explores the depth, breadth, and lasting cultural legacy of Edward Curtis’s monumental work. The exhibition, both survey and critique, tells the story of one of the most prominent photographers of his time, who sacrificed everything for his work on The North American Indian, only to die in obscurity. Curtis’s images have been extensively exhibited and collected, and have become iconic over the past century. Organized by the MMA, this exhibition will be perhaps the largest and most comprehensive survey ever presented of The North American Indian. For what may be the first time, the entire collection of all 723 portfolio photographs will be on display. Importantly, this thorough survey and overview of The North American Indian also examines the challenges and controversies that the work has faced through the years, and in our own time. The exhibition runs through September 10, 2017. Visit muskegonartmuseum.org for visitor information or call (231) 720-2571. 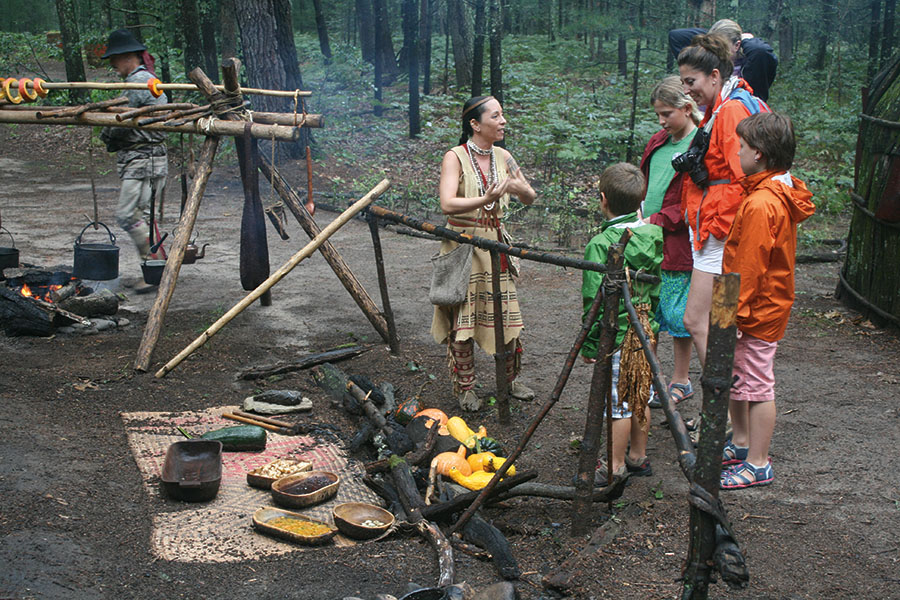 Special programs related to Edward S. Curtis: The North American Indian in other locations throughout the area:
• Native Heritage: The North American Indian
Michigan’s Heritage Park, through October 28 and Lakeshore Museum Center, May 11 through September 10 The Lakeshore Museum Center is featuring over 40 Native American artifacts from its collection at Michigan’s Heritage Park in Whitehall and in the Cabinets of Curiosity at the main museum site in downtown Muskegon during the MMA’s exhibition Edward S. Curtis: The North American Indian. Among the artifacts on display in the Visitor Center at the park are two headdresses, jewelry, pottery, beadwork, baskets, and moccasins. The items selected for the display complement a selection of Curtis’s photogravures. The items in the Curiosity Corner are primarily beadwork and jewelry. For more information, visit www.lakeshoremuseum.org or call 231.894.0342.
• Honoring Native Heritage Pow Wow at Michigan’s Heritage Park, Whitehall
Saturday, July 15, 10:00 am – 8:00 pm and Sunday, July 16, 10:00 am – 4:00 pm
For more information, visit www.lakeshoremuseum.org or call 231.894.0342.
• Theatre Presentation at Howmet Playhouse, Whitehall
The Rememberer by Steven Dietz
Thursday, July 27, 7:30 pm, Friday, July 28, 3:00 pm, Saturday, July 29, 7:30 pm The true story of a young Squaxin Indian girl, who is forcibly taken from her home and placed in a government-run school in 1911.
• A Taste of History: Celebrations at Michigan’s Heritage Park, Whitehall
Saturday, August 12, 10:00 am – 4:00 pm
Jessica Diemer-Eaton will demonstrate traditional Native American food preparation. For more information, visit www.lakeshoremuseum.org or call 231.894.0342.
• Drumming Performance at Muskegon’s Bright Lights Festival at Muskegon South Pierhead Light
Saturday, August 19, 2:00 pm