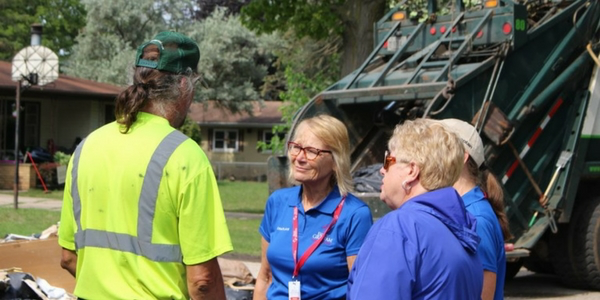 Crisis-trained chaplains with the Billy Graham Rapid Response Team have deployed to two flood zones within the month of July. On July 16, they responded to devastating flooding in the southeastern part of Wisconsin, where rising waters washed out roads in Kenosha, Racine and Walworth counties.

“As the floodwaters rose, so did the levels of despair and hopelessness in the hearts of many families in the area,” said Jack Munday, international director of the Billy Graham Rapid Response Team. “In the coming days, as they’re allowed back into their homes, many will find themselves dragging everything they own to the curb—soggy, moldy and unsalvageable. Our desire is to offer God’s hope and encouragement as they journey through this crisis.”

The same heavy rainfall prompted another team of chaplains to deploy to Northeastern Illinois a few days later. For both deployments, Rapid Response Team chaplains are serving alongside Samaritan’s Purse, working together to bring the love and compassion of Jesus Christ to hurting residents.

The Illinois deployment marks the third time the Rapid Response Team has responded to floods in 2017 and the seventh time this year the chaplains have responded in the wake of a natural disaster. Earlier this year, the team deployed after tornadoes sliced through Albany, Ga.; Durant, Miss.; Forrest County, Miss.; and New Orleans, La. Chaplains also ministered in Ripley County, Mo., after devastating flooding in May.