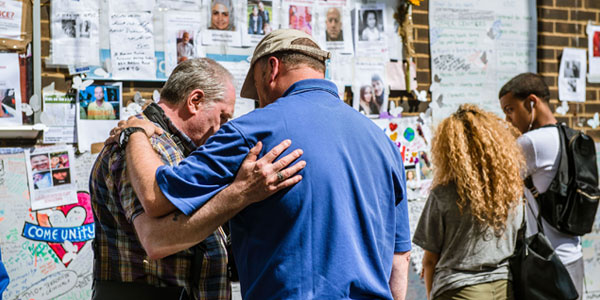 Crisis-trained chaplains with the Billy Graham Rapid Response Team have wrapped up two major deployments in which they had the opportunity to minister to the emotional and spiritual needs of hurting people in the U.S. and abroad.

In late April, a devastating tornado struck the small town of Durant, Miss., damaging hundreds of homes. The Billy Graham Rapid Response Team sent chaplains into the area alongside Samaritan’s Purse and together they helped the community – which sits about 60 miles north of Jackson, Miss. – as they began to recover. Over the course of nearly seven weeks, a total of 28 chaplains from around the country rotated into the area, praying with and comforting some 1,785 people.

Across the Atlantic, a horrifying scene played out on June 14 as London’s Grenfell Tower apartment building was consumed by a widespread and fast-moving fire. At least 79 people lost their lives in the blaze. Chaplains came alongside a local church to share the hope of Jesus in the midst of the deep pain and mourning. They ministered to hundreds and prayed with 340 people, including many who lost loved ones and friends. It was the third time in as many weeks that the Billy Graham Rapid Response Team deployed chaplains in the United Kingdom. The group provided emotional and spiritual care to survivors and mourners following the Manchester Arena bombing on May 22, and the June 3 attack on London Bridge and the Borough Market. Chaplains with the ministry also responded to London following the terror attack in March.