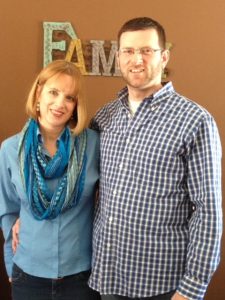 Never in my wildest dreams did I ever imagine that one day, after 31 years in the retail grocery business, I would become the owner of not one but two grocery stores. And not just any grocery stores but the very ones which I have spent my entire working career learning about the crazy yet exciting retail business. Talk about a true blessing.

It was a little more than three decades ago, when I was a junior at FHS, that I turned in an application at what was then Fruitport Foods in pursuit of my first real job; yep you guessed it a customer service bag boy/carryout. I wasn’t really sure why I wanted to work at the local grocery store but I had a ton of memories of shopping there with my mom and it seemed like a pretty cool job. So after calling and bugging the management staff for weeks on end, I finally must have drove Al Wilson crazy enough to have him ask me to come in for an interview. I did, must have went well, (or he didn’t want me calling anymore), and he hired me…..May 6, 1986.

My gut was right, I loved working there. Every day offered so much variety and so much to learn and the staff I worked with was a great bunch of people who taught me a lot about the grocery business. But my favorite part of the job was and still is my favorite part of my job; getting to know and serve the amazing customers from the surrounding communities and forming lasting, meaningful relationships with them. The saying goes “it takes all types” and believe me I think I have met all types over the years but that’s what makes each day so enjoyable. It’s the people.

Over the years, my knowledge of the grocery business grew as I gained experience working in just about every department within the store. You see, in the grocery world, if you show a solid work ethic and the desire to take on new challenges, it is almost certain that you will advance your way around the store until you have gained wisdom in most all of the departments, many times taking on more than one at a time. But what’s next? Well, when the time is right, like it was for me back in 1992, it was time to graduate to the next level of learning; what it meant to be part of the store management team. And for that, I can thank my longtime manager and mentor Wayne Ferrier. Wayne told me that the company was planning on building a brand new store right next to the current one, and that they wanted me to train to become an assistant store manager, ready to go when the doors opened on the new facility.

So, when the new store opened up in the summer of 1993, I was officially a part of the store management team, along with Wayne, Jack Stevens, and then owner Brian Punches. It was at this time that the real learning started at a whole new level, overseeing the entire store was a much different responsibility altogether. Once again, I gained valuable experience and knowledge from this group of guys who took me in under their wings, taught me what it takes to be a store manager, some through conversations, some by hands on, and some by trial and error. I can honestly say most of what I learned from Brian Punches wasn’t by what he did say but what he didn’t say; his calmness, his approach to situations, his view on taking care of the customer, and how he treated his management team and staff. Character and integrity, he had it and I was drawn to it.

Summer, 1996, the Punches family along with several other individual local investors built a new grocery store in Spring Lake, very similar to the Fruitport location layout and slightly larger. With both stores now under the same banner of Orchard Markets, these changes were about to bring about more opportunity.

August 30, 2004, a couple of years after being bought out by Roundy’s, a corporation out of Milwaukee, WI, Gary Gerlach, then of Hudsonville, MI stepped forward and purchased the two stores from the corporation, once again bringing them back to the community as “family owned and operated stores”. In 2006, we made some changes within the company structure that changed my role going from the store manager at Fruitport to the general manager of both store locations. This was an incredible challenge and blessing at the same time. Like I said earlier, it’s all about people; and getting to really know the staff at Spring Lake and the amazing customers who shop and live around there has been awesome to say the least.

Over the next 11 years, I split my time between Fruitport and Spring Lake, overseeing the operations, daily conditions, staffing needs, and human resources. Gary and I had a great working relationship; he allowed me the freedom to do my job while always providing guidance and support through his many, many years of experience in the grocery business but we also had a special friendship as well. In a lot of ways, we shared many similarities in the career path we chose and the direction the path took along the way. We shared high standards, high expectations, and a commitment to customer service and our communities.

In the early spring of 2015, Gary approached me about my interest in owning the stores one day, after he had decided that he was nearing the end of his career path and felt that he was ready to pass the baton on, not to just anyone, but he specifically said that he wanted to sell the stores to me. Talk about being humbled and blown away at the same time. Over the past 13 years of working for Gary, as his store manager first then as the general manager of both locations, I can honestly say not only did he teach me a wealth of knowledge but that he treated me as if I was part of his family, which I will forever be grateful for.

So, on July 11, 2017, I officially became the new owner of Orchard Markets Fruitport and Spring Lake. My wife Julie and I along with our children Erin and Evan feel so incredibly blessed as we take on this new endeavor. We look so forward to continuing our service to the wonderful people and families that make up the communities of Fruitport, Spring Lake, and the surrounding area. When we look back at this journey that started some 31 years ago and reflect on the life path that weaved, twisted, and turned along the way, we can only say thank you, thank you, thank you for your ongoing continued support throughout the years.

No, I could not have imagined this in my wildest dreams but His ways are higher than mine and for that I am forever thankful.