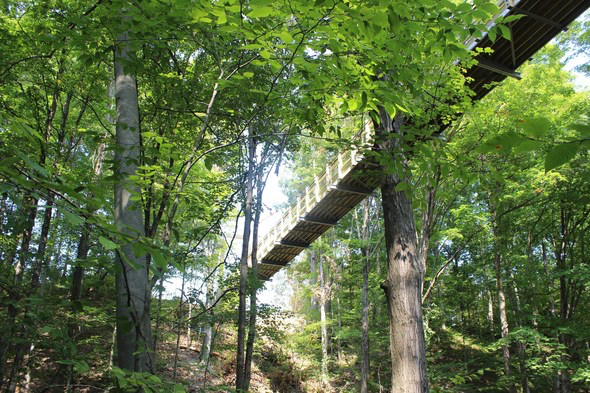 The Grand Ravines Suspension Bridge spans 275′ across a 70′ ravine in Jenison, MI

Ottawa County Parks is pleased to announce the Grand Ravines Suspension Bridge is open to the public as of this morning.

Until recently, a suspension bridge in the Ottawa County Parks system seemed like a pipe dream. “When the master plan was created for Grand Ravines, those beautiful, deep ravines made it challenging to design a viable hiking trail system. We were fortunate to get a permanent trail easement donated by neighboring landowners, which helped in navigating the steep terrain. For a full loop, crossing a major ravine with a trail was unavoidable and a suspension bridge was added into the plan, knowing it was an amenity that may never be financially feasible,” said David VanGinhoven, President of the Parks Commission.

Thanks to a generous individual, with great interest in the Parks’ “pie in the sky” idea, that dream has become reality. “Beatrice Aldrink Idema, known by most as Bea, has very generously donated the funds needed to construct a suspension bridge, allowing a trail connection between the north and south sides of the park,” said VanGinhoven at an event this spring.

Bea was in attendance at a small unveiling event on September 14 and was the first person to cross the officially completed bridge. She will be honored at the Grand Ravines Dedication Event on October 5, 2017 (see below for details).

The Grand Ravines Suspension Bridge is 275′ feet long and 70′ in the air; it’s believed to be the longest pedestrian suspension bridge in Michigan, and, the greater midwest region. It is fully ADA accessible, with paved, accessible paths leading to the bridge on both sides (both segments of pathway that connect to the bridge were covered by yet another donor).

The bridge was constructed by Anlaan Corporation, based out of Grand Haven. “We were incredibly impressed with their work and their timeline. They completed the bridge in three months, right on schedule. It will be a great spot to see fall color,” said Parks Director, John Scholtz. “Grand Ravines is already such a beautiful place and this bridge makes it a true Michigan destination. We are confident that this bridge, and the Grand River Explorers Trail that will run through the park, will bring visitors from near and far, eager to enjoy everything this area of the county has to offer.”

The Parks Commission has received many donations, both large and small, from the community throughout the years. Many parties are to thank for making Grand Ravines the special park it is today. The ravine overlook was built with a gift from the Aldrink family. The dog park has received support from park users, Chow Hound Pet Supplies, the Hudsonville-Jenison Community Foundation, local veterinarians and businesses, most recently WorkSmart Database Masters, LLC and many others.