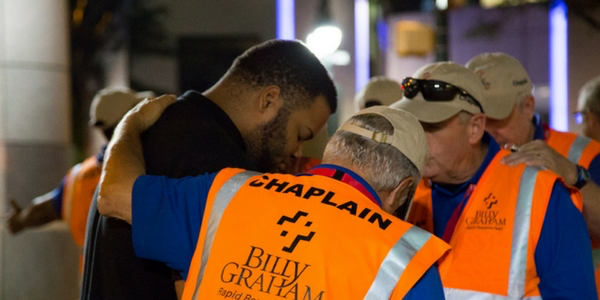 The Billy Graham Rapid Response Team has deployed chaplains to Las Vegas following the horrific mass shooting on the Las Vegas Strip. The attack, which took place at a country music festival near the Mandalay Bay Hotel and Casino, is now the deadliest mass shooting on American soil in modern history.

“We mourn for the families that lost loved ones, especially in such an evil and violent manner. We grieve for the survivors who will carry the emotional and physical scars the rest of their lives. The terror that took place last night in Las Vegas will forever be etched in the minds of those who were present,” said Jack Munday, international director of the Billy Graham Rapid Response Team. “We will be there to talk with and pray with the hurting, offering the hope, and comfort of Jesus Christ in these dark days.”

Along with the new deployment to Las Vegas, the Billy Graham Rapid Response Team continues to work in the hurricane-devastated areas of Texas and Florida. As of this morning, more than 310 chaplains from across the country have worked in eight different regions around the two states, as well as in evacuation shelters. They’ve ministered to more than 18,000 people affected by the storms. Additionally, the team has a plan in place to send chaplains to Puerto Rico following Hurricane Maria as soon as the situation stabilizes to the point that they can respond.      

In natural disasters such as the spate of recent hurricanes, the Billy Graham Rapid Response Team deploys in coordination with Samaritan’s Purse, the Christian disaster relief organization also headed by Franklin Graham. Together the two ministries address the physical, emotional, and spiritual needs of those who have been affected.