For anyone that has done any amount of traveling, they know that every small town has its fair share of secrets, legends and myths. Well, Fruitport is no different. As I’ve been studying local history, I’ve come across several examples of this in our little town. The Fruitport Historical Society has fielded many of these questions, but I thought it would be worthwhile to dispense with some of the most notorious ones for all to hear.

One of the most popular stories that I’ve heard involves the ‘Fruitport Gold’. Ron Cooper brought me in on this several years ago and I spent some time researching it for myself. The story involves a stagecoach robbery, a death bed confession, and of course, Fruitport’s Pomona House. In August 1874, five men from Muskegon headed north to White Cloud and robbed a stagecoach loaded with payroll for the logging camps. Dressed as Indians, the men got away with $74,000 worth of gold coins. Today, that amount would be worth over $1.5 million. One of the men, Sam Norris, worked as a janitor at the Pomona House and hid his share of the loot in the cellar wall of the hotel. A year later the hotel burned. The story seemed to end there; until Ron Cooper received a letter from a woman in Florida in 1986 that included a copy of the original ‘deathbed confession’ that told the story. The author of the letter was Sarah Norris, Sam’s sister who was filled with shame and regret that her brother would have done such a thing. Apparently, the hotel burned before the gold could be removed. This myth, according to my research and that of Ronn Mann Sr., is true. The robbery really happened and part of the gold was more than likely hidden in Pomona Park as indicated by the letter.

However, it is highly unlikely that it is still there. After extensive renovations, the Pomona House reopened about a year after the first fire, which means carpenters and construction workers would have torn down walls and rebuilt most of the remaining structure. After the second fire in 1876, the cellar was left exposed in Pomona Park for decades. More than likely, someone would have found it and never said a thing about it. In the summer of 2012, I was present for an archaeological dig seeking the foundations of the Pomona House. Many people stopped to ask if we were looking for gold. No, we weren’t; nor did we find any. So, this myth is true. But don’t waste your time looking for it, because it’s long gone.

The next myth is a fun one. It involves secret tunnels that run under the Village Park Bed and Breakfast. The bed and breakfast was at one time the home of Joseph Ford, manager and operator of the Spring Lake Iron Company. Many older residents recall Furnace Town, well, that was it. Ford built his home in the early 1880s and lived there until his death in 1912. While there is no historical indication that the tunnels actually exist, previous residents claim to have found them and even admit to playing in them as children. I was invited by the current owners to investigate this a few years back, and found it very interesting. While I did not find the entrance to the tunnels myself, there is indication that they are there, or once were. Some stories have been floating around about the purpose of these tunnels. One explanation was that they were used by John Dillinger to rob the Fruitport bank. According to local legend, one tunnel ran east from the current bed and breakfast directly under what is now Fifth Third Bank. Well, John Dillinger was born in 1903 and died in 1934. The bank wasn’t built until 1963; so that one is bunk. The next one claims that bootleggers used another tunnel, this one extended south under the road into the basement of the Pomona House, to steal and transport booze. Again, the dates don’t add up. The Pomona House was gone for nearly twenty years before the Ford home was even built. Another version of the story gives a possible use of the tunnels as part of the Underground Railroad. Most northern towns would love to say they contributed to this noble cause, however, it is not likely. Again, the dates simply do not add up. Thanks to the 13th Amendment, slavery was officially ended in 1865. Michigan did play a part in the Underground Railroad, but the furthest stop north was in the Jackson area. Also, the house wasn’t built for another fifteen years. While we haven’t found any tunnels, they very well may be there. However, their purpose was more than likely something innocent and not nefarious. This myth is plausible. 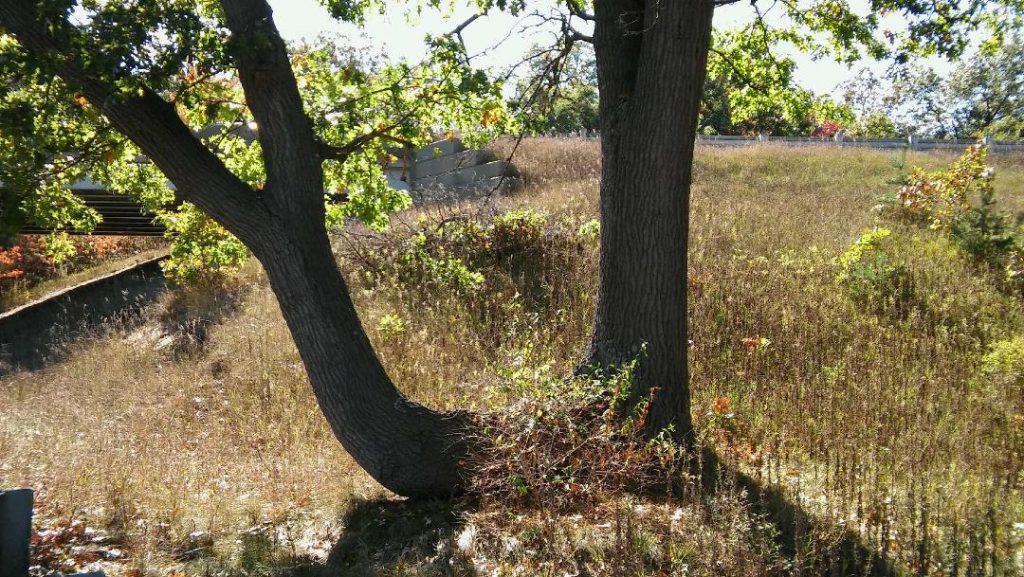 The last myth that I’ll cover is one that may strike a chord with most Fruitport residents. It is one of the most impactful and longest lasting of the local myths; the bent Oak tree. For those who don’t know where or what this is, it is a strangely bent Red Oak tree located between the westbound and eastbound sections of I-96 on Airline Road heading south into Fruitport. When the highway was built, the Michigan Department of Transportation supposedly left this tree alone. Legend has it that this tree was bent by Indians and used as a trail marker heading to the trading posts in Grand Rapids. This story has a few problems. Firstly, while Indians did live and trade in the Fruitport area, their presence was very much depleted by the signing of the Treaty of Washington in 1836. This treaty was the formal ceding of most of the state of Michigan to the United States by the Native tribes. 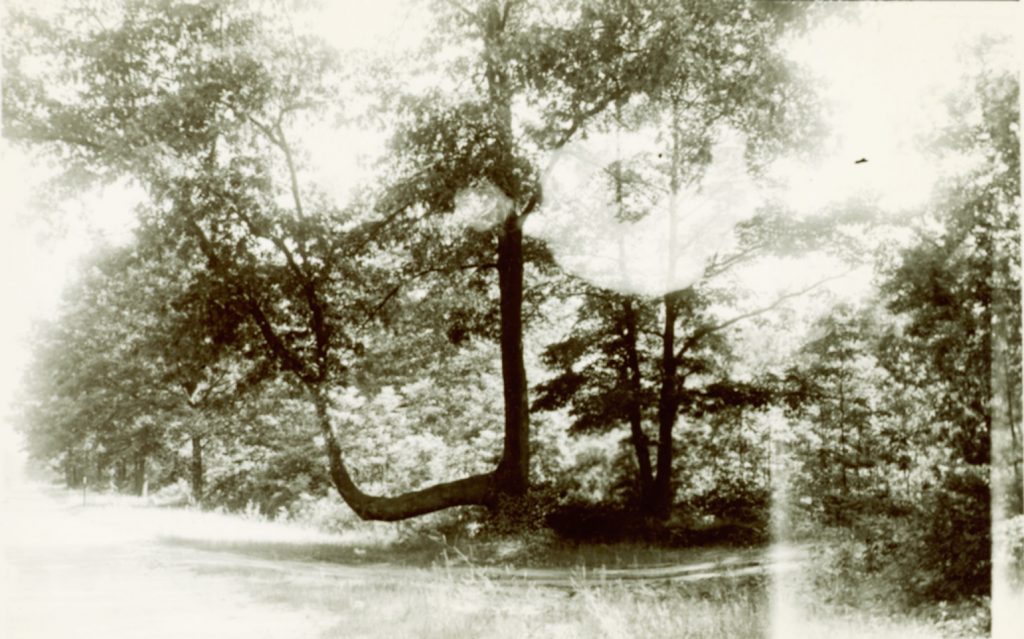 One of the earliest known photographs of the Bent Oak Tree, date unknown. From the Collection of the Lakeshore Museum Center.

By using approximate dating methods, the oak tree in question is roughly 160 years old. This is a working number calculated from multiplying the trees diameter and the growth factor for that species of tree. Many environmental factors could impact this number and change it in either direction. The branch that extends out is smaller and is approximately 100 years old. Assuming the age is correct, that would place the initial growth year of the tree in 1857 and the branch in 1917. These years tell us some things. First, the initial date for the main tree trunk was twenty one years after the land was ceded to the United States government. In that era, when more and more white settlers moved in, the natives quickly moved out. Michigan became a state on January 26, 1837, and by 1860 nearly 750,000 residents were calling themselves Michiganders. The second date, if correct for the branch, puts it way out of the question that it was done by Indians. In 1917 the world was engulfed in World War I and the native presence in Michigan was almost completely assimilated to western culture.

Second, as a matter of respect for the native peoples of the America’s, they were very precise. With a small background in archaeology, I have seen some beautiful and amazing things that were designed and built by native peoples. They were accurate and precise. In regards to the tree, the branch points almost directly east, with an azimuth of about 93 degrees. If a traveler were to follow the direction of the tree branch, it would take them to Rockford, not Grand Rapids. This is about fifteen miles north of their supposed destination. If the tree was bent by Indians, I don’t think their target destination was Grand Rapids. If our tree was just one of many that pointed towards Grand Rapids, the others are long gone.

Now, this is what we do know. Fruitport and the rest of West Michigan was home to loads of Native Americans. When the first settlers came into the Fruitport area, which was officially in 1841, they more than likely still encountered some natives. But they were on the decline and were heading north, west or were beginning to assimilate into western culture. Some historical evidence does exist that might give a reasonable explanation about the tree. Some older residents agree that the tree was bent by school children as a joke. I have seen more than one account of this. I will name this myth ‘plausible’ because the date range of the main tree could have seen its fair share of Indians, but it is highly unlikely that it was bent by them or used as a trail marker.

These ‘myths’ are fun to talk about and certainly give our little town some character. Whether or not they are true is hard to say. While we have the historical process of researching and presenting evidence, it will continue to be the mission of the Fruitport Historical Society to learn as much about the past as we can and preserve it for future generations. If you have another ‘myth’ you’d like mentioned in the future, contact the Fruitport Historical Society. We can be reached online at www.fruitporthistory.com and on Facebook.