Madison Heights, MI – On November 18, 2017, Michigan Libertarians held a protest in Ann Arbor in response to the newly implemented Roadside Drug Testing Pilot Program. Among those in attendance at the rally were US Senate candidate Brian Ellison and Libertarians of Macomb County Chair Mike Saliba, along with several other members of the Libertarian Party. 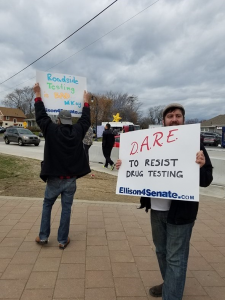 Public Act No. 243 (SB 434), establishes a 1 year pilot program for the use of oral fluid analysis, as described in Public Act No. 242 (SB 207). The controversial program went into effect on November 8, 2017 in Berrien, Delta, Kent, St. Clair, and Washtenaw Counties. The group chose Ann Arbor since the community will be directly affected by the pilot program.

Crowds came and went as the group held up signs in the hour leading up to the University of Michigan vs. Ohio State Football game, on the Northeast corner of the Pioneer High School property. “The location was perfect. Crowds were forced to stop before crossing the street to go to the football game. This gave us time to engage with the public and explain the problems with the drug testing program”, explained Ellison, “People really need to understand how ridiculous this program is. The test results are unreliable and have no direct correlation to intoxication or impairment, but officers can make an arrest decision based solely on these results. Hopefully people can understand that no matter how bad they think drugged driving is, locking up innocent people is much worse.” 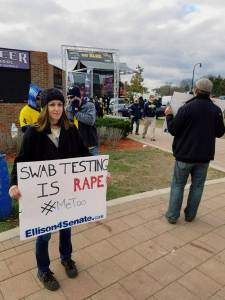 The reason behind the new program in a matter of debate. Michigan State Police claim that the program was designed to combat the dangers of drugged driving. Many other people who have looked at relevant data think otherwise. “In the last decade there was nearly a 40% decrease in DUI related arrests. Those arrests are a major source of revenue for many government agencies. Based on the way this law was written, allowing for arrest based in whole on the results of this faulty test, it’s clear to me that this is about one thing: money,” claims Brian.

Based on the success of this event, the group is already looking to plan another. According to Ellison, “We’re looking at Grand Rapids, Port Huron, Ypsilanti, and of course Ann Arbor again. Who knows, maybe we’ll just do it on the front lawn of the Michigan State Police. We’ll do the next event wherever we see the most potential for spreading news about this injustice, and we’ll keep doing it until our legislators figure out that ‘we the people’ are not here to be abused and to fund their reckless spending. In the meantime, I want everyone to know that they should refuse this test and fight the civil infraction in court.”

Oral fluid analysis kits have been shown to be statistically unreliable and can detect the presence of controlled substances long after impairment has subsided. Additionally, having a prescription does not exempt a person from arrest. The law specifically states that “A peace officer…may arrest a person in whole…upon the results of a preliminary oral fluid analysis.” Other states with similar programs have seen an increase in false arrests. According to the Michigan legislature and Michigan State Police, “implied consent” can be retroactive, meaning that you can imply consent to a law that does not exist at the time your license was issued.