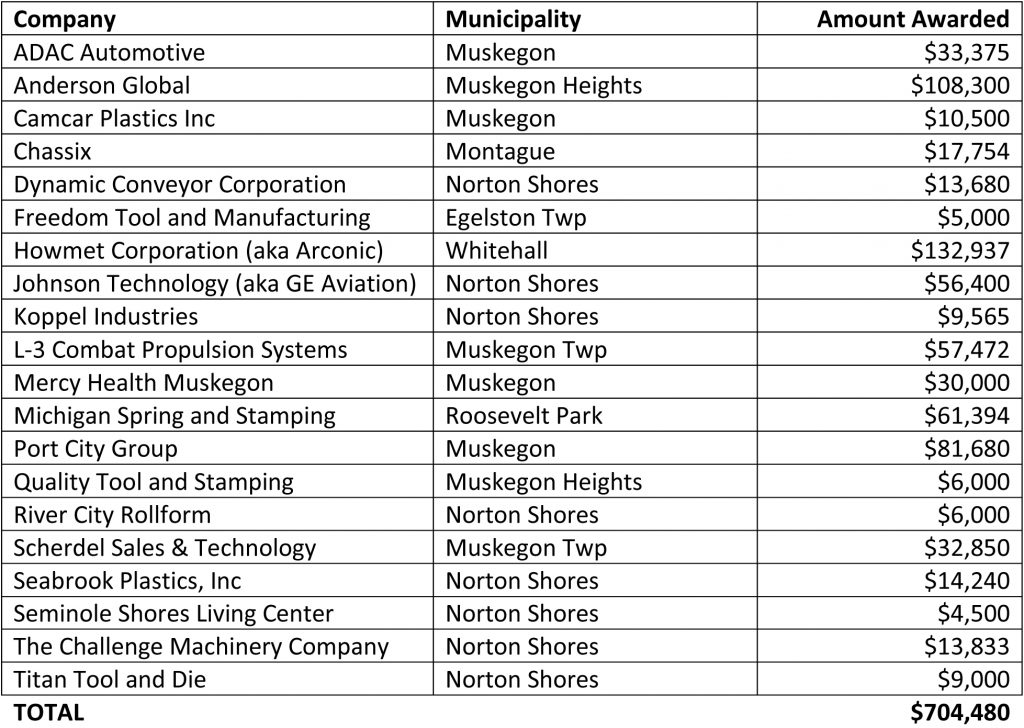 The number of companies awarded in Muskegon increased by over 100% from the 2016-17 program year, when nine companies were awarded. Darryl Todd, Interim President & CEO for Muskegon Area First said, “We are pleased that more local and smaller companies were awarded this year.” He added that, “Many [smaller companies] forego employee training due to budgeting and/or time constraints and access to funding that will enhance employee skill level can have a particularly significant impact on a smaller company’s ability to grow.”

Businesses such as Norton Shores based Seabrook Plastics, Inc. a first-time recipient of the STTF, which recently completed a 12,000 sq. ft. building expansion in November, will use the funding to further growth plans by addressing employee capabilities and becoming more efficient. Bill Veldboom, General Manager & COO of Seabrook Plastics said, “With our recent expansion and internal promotion of several long-term Seabrook employees, the STTF represents an ideal vehicle for growing the skills and potential of employees that have been hired over recent months”. Veldboom added, “We believe that the training included in the upcoming curriculum will accelerate employee’s learning while concurrently reducing cost in our manufacturing and assembly processes.”

Similarly, Challenge Machinery Company also of Norton Shores will use the grant to address workforce needs, specifically to stabilize its talent base. “[Challenge] competes globally and has a long history in West Michigan with many experienced, highly skilled personnel that will retire and leave a considerable gap”, said Tom Zant, President of Challenge Machinery. “This grant allows us to affordably increase the skills of 16 employees in mechanical print reading, electrical schematics and hydraulic and pneumatic principles to develop the next generation of long term employees”.

On a regional basis, Michigan Prosperity Region 4, which is comprised of 13 West Michigan Counties, had 212 businesses awarded over $8.4 million. Overall, West Michigan employers received 29% of the total amount of STTF funds available. Muskegon area companies received 8.4% of the amount awarded to West Michigan.

The STTF was created 5 years ago by the Michigan State Legislature and has become highly sought after with funding dollars increasing nearly every year. The statewide amount awarded for 2018 nearly reached $30 million. For 2017, the amount awarded topped $14 million. The STTF is on track to train over 50,000 workers with more than 1,400 employers taking advantage of the program.