Now announcing the Idema Explorers Trail!
The Ottawa Parks Foundation is pleased to announce a landmark $2 million gift from the Bill and Bea Idema Foundation for the development of the Grand River Greenway.

The Ottawa County Parks Foundation appreciates the great passion and support of Bea Idema for nature, education and for the preservation of the environment for future generations. In recognition of this gift and support, the central feature of the Grand River Greenway – the Explorers Trail – will be named in honor of Bill and Bea Idema.

“Bea Idema is a dear friend of mine. She’s a special person with a generous heart,” said Greenway Campaign Co-Chair Peter Secchia. “Through this gift, the Greenway Campaign has turned a corner – we are now much closer to achieving our goal of raising $7.2 million to expand access to the thousands of acres of land along the Grand River, protect additional land, and complete a trail connection between Millennium Park and the Grand Haven beach.” 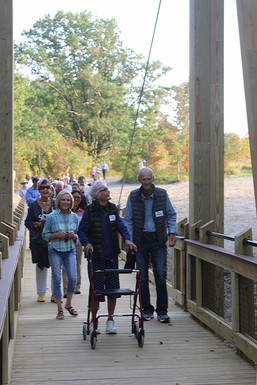 “Bea’s spirit – her love of nature, of sharing nature with others, and educating young people – match the spirit and experience we hope to create with the Idema Explorers Trail,” said Greenway Campaign Co-Chair Monica Verplank.

“We are proud to re-name the trail the Idema Explorers Trail. Bea and her family have done so much for the West Michigan community, for Grand Valley State University, and for Ottawa County Parks. The Idema family also has deep ties to the Greenway lands. That is why we feel the name is a perfect fit,” added Greenway Campaign Co-Chair Samantha Verplank.

Bill and Bea Idema provided support for the development of one of the premier Greenway parks: Grand Ravines. This includes providing funding for the Aldrink Ravines Overlook and $350,000 for a 275’ Suspension Bridge, the longest pedestrian suspension bridge in the state. Bea’s sister, Joyce Versluis played a strong support role and is especially excited about the Greenway connecting the campuses of Grand Valley State University. “It is wonderful that GVSU students will be able to hike, bike, and kayak between the Allendale and Grand Rapids campuses and enjoy the beautiful nature and environment of the Grand River Valley.”

The Greenway Campaign is the culmination of the 30-year vision to create a vast natural space along the Grand River and connect people to it. Thousands of acres of high quality natural and recreational lands have been protected to-date, but to complete the vision and make needed connections Ottawa County Parks plans to acquire 700 acres of additional land and construct 27 miles of new trail (with 13 miles of the trail along or near the river or other water features) over the next five years. This will require $21 million in funding, with the Parks Foundation seeking $7.2 million in philanthropic gifts to leverage anticipated public funding.

In addition to land acquisition and trail construction, an important component of the Greenway plan is to create a distinctive trail “experience” through wayfinding, interpretive displays, and possibly even artwork in appropriate locations.

“It is really important that there is a strong identity on the Idema Explorers Trail and that the Greenway has sense of place. We want users to be confident of where they are going and know what amenities are available along the way,” said Ottawa County Parks Director John Scholtz. As part of this effort to create an identity, Spring Lake design firm Concept A was hired to develop a logo for the trail.

The planned interpretive experience was an important factor for the Bill and Bea Idema Foundation supporting the Greenway project. “The Grand River is not only important to West Michigan ecologically, but is one of the West Michigan’s defining features historical and culturally. Therefore, everyone feels it is important that we use the Greenway to tell the story of the Grand River from pre-European settlement, through the logging era, and to the current time,” said Myron Aldrink, Greenway Campaign committee member. Ottawa County Parks plans to establish a team to assist with the design and development of the interpretive displays throughout the Greenway. 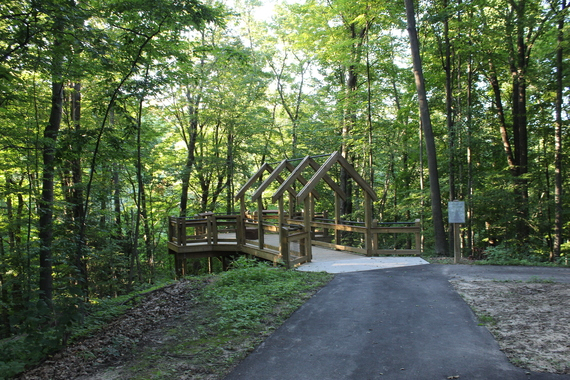