Muskegon, MI – Cindy Larsen, President of the Muskegon Lakeshore Chamber of Commerce, accepted the Grand Rapids Business Journal 2017 Newsmaker of the Year award this morning at the Frederik Meijer Gardens & Sculpture Park in Grand Rapids. This award recognized Muskegon’s redevelopment over the year which includes over $1 billion in investments.

Over 600 West Michigan business and community leaders were on hand to witness the award recognition. “It is great to see Muskegon being recognized for its economic success,” says Larsen. “The Watch Muskegon campaign was launched at the perfect time to capture the amazing story of Muskegon’s evolution.”

The community engagement strategy formulated by the Watch Muskegon Campaign has tapped the energy of over 100 community stakeholders and thousands of area residents. “From large businesses and small business start-ups to investments by education and government, Muskegon’s resurgence is now unstoppable,” according to the Chamber President.

Also recognized at this event was GE Aviation/Norton Shores facility. They are one of many growing manufacturing companies located along the Muskegon Lakeshore. 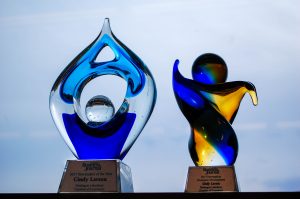 In addition to winning the 2017 Newsmaker of the Year award, Larsen and the Muskegon Lakeshore Chamber won the Newsmaker award in the economic development category.

About the Chamber – The Muskegon Lakeshore Chamber of Commerce is the premier business membership organization on the lakeshore representing over 1,200 businesses and organizations. The Muskegon Chamber represents businesses of every size and type all over West Michigan. The Chamber is celebrating 125 years in operation working to sustain an environment for business success through community leadership, promotion, inclusive business advocacy and valued member services. The Muskegon Chamber is an award winning Chamber, being named Chamber of the Year for the State of Michigan in 2006, 2010, 2012, and 2015 by the Michigan Association of Chamber Professionals.