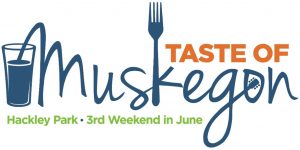 “We heard the request for more vendors so we are responding. We are so excited about the variety of great food available in Muskegon. It’s a great opportunity to highlight everything Muskegon does well.” Ann Meisch, Director of Taste of Muskegon.

Taste of Muskegon Presented by Cole’s, being put on by the City of Muskegon for the first time, will take place on June 15th and 16th in Hackley Park. It joins Parties in the Park Friday night and will feature the West Michigan Offshore Club Powerboat Street Party as part of Powerboat weekend. Saturday will begin with the United Way’s Ride United bicycle event and offer a Kid’s Safety Saturday with fire trucks, a police K-9 unit, kid’s ID program and more. Awards for Taste of Muskegon’s best plates will take place Saturday afternoon and includes both judge and public votes. To learn more about the restaurants and events at Taste of Muskegon 2018, visit their website at www.tasteofmuskegon.org.