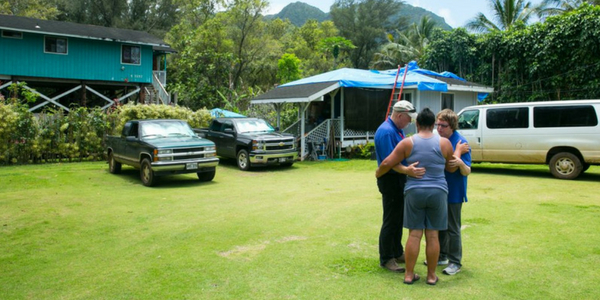 A small group of chaplains was already in Hawaii ministering to flood victims in Kauai when Kilauea erupted on May 3, forcing thousands of residents to evacuate. Chaplains have been praying with and comforting those affected by both the volcano and the floods for more than a month.

“We’ve had a lot of opportunity for ministry with the people in the community,” said one of the chaplains. “They’re so receptive to the fact that we’re here, that we love them, that God loves them. The name of Jesus is being lifted up, so that’s really great.”

Another group of chaplains just completed their deployment in Santa Fe, Texas. The community was in shock after eight students and two teachers were killed when a shooter entered Santa Fe High School on May 18.

“They’ve just accepted us with open arms,” said Jeff Naber, manager of chaplain development and ministry relations for the Rapid Response Team. “There was not one person who said, ‘No, I don’t want to pray.’ Everyone accepted prayer and prayed with us.”

For more information on the ministry, including videos, photos, news articles and an interactive map of former and current deployments, visit www.billygraham.org/rrt. Updates can also be found at www.facebook.com/rrtchaplains.