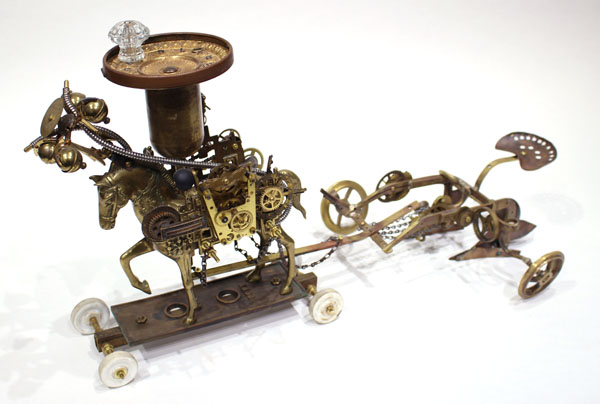 Muskegon, MI—The Muskegon Museum of Art will present the sculptures of Michigan artist Nat Rosales in a one-person show from October 18, 2018 through January 13, 2019. FantasMenagerie: The Art of Nat Rosales features the fantastical vehicles and creatures Rosales creates from scrap metal, found and manipulated objects, and mechanical parts. The MMA invites the public to an opening reception Thursday, October 18 at 5:30 pm. The artist will talk about his work in a program starting at 7:00 pm. The event is free. 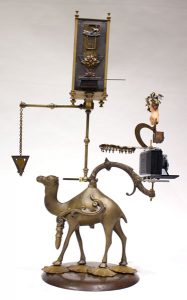 Nat Rosales assembles his sculptures using cast bronze and brass animal sculptures, door and drawer knobs, decorative lamp bodies, gears and drives, various housings, and a host of decorative metal, plastic, and ceramic bric-a-brac. According to MMA Senior Curator Art Martin, “The resulting combinations are a blend of Alice in Wonderland and H.G. Wells, an amalgam of whimsy, fantasy, and mechanics.” 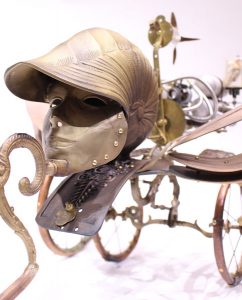 FantasMenagerie features over a dozen of Rosales’ recent works, a menagerie of vehicles, contraptions, and mechanical-animal hybrids. Formed from found objects and scrap, and inspired by Rosales’ life and culture, these fantastical creations invite the viewer along on a journey of magic and exploration.

Rosales has been drawn to sculpture since childhood, an ideal expression for his fascination with taking things apart and exploring how the resulting pieces might be reconfigured and assembled. His current body of work began in 2004, with one of his earliest creations, Hog I, appearing in the Muskegon Museum of Art’s annual juried Regional Exhibition in 2005. His Mexican and Catholic heritage combine with a life-long interest in Cubist and Modern sculpture to form the foundation of his artistic expression. 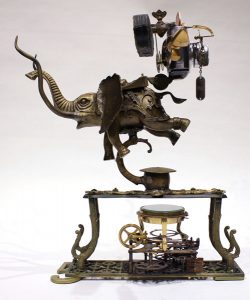 Nat Rosales will make a second appearance at the MMA in a gallery “Crash Course” on Thursday, November 8 from 6:00 to 7:00 pm. He will point out features of his works in the show and discuss his techniques at this free public event.

FantasMenagerie is underwritten by the Van Kampen Boyer Molinari Foundation. The Michigan Artist Series Media Sponsor is Blue Lake Public Radio. Additional support is provided by the Michigan Council for Arts and Humanities, an affiliate of the National Endowment for the Arts.

The Muskegon Museum of Art is located in downtown Muskegon at 296 W. Webster Ave. Visit www.muskegonartmuseum.org or call 231-720-2570 for more information.