Van’s Car Wash & Quick Lube has been locally owned and managed, serving the community for 50 years. In 1969, the first car wash opened on Sherman Blvd. This location is one of the few that prep and spot clean your car before the automated wash. Also, with an oil change or auto service purchased, customers receive a free car wash. 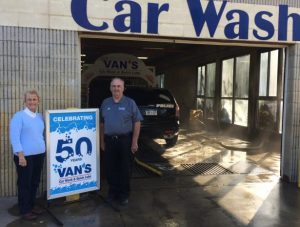 Van’s story began on October 15, 1930, when Gerritt Vanderstelt and his son Henry opened Van’s full-service gas station at 1087 W. Laketon Avenue in Muskegon. Their franchise would eventually expand to five locations. Henry Vanderstelt took over the company after his father’s passing. In 1979, Henry retired and his sons, Gary and John, took over the reins of the family business, which included a car wash and gas station on Sherman Boulevard. In 1987, Gary decided to retire from the business and sold the original location on Laketon Avenue, while his brother John continued to own and operate the full-service Sherman location. Two of their sons, Mike and Jerry, remained as the co-owners and operators of the company. Today, the family legacy continues under current owner, Jerry Vanderstelt.

Currently, Jerry owns and manages seven locations in the Muskegon, Fruitport, and Fremont area. As the 50th anniversary occurred on January 24, 2019, Jerry had this to say, “I am extremely proud to carry on four generations of service to our community and our entire team is looking forward to continuing the tradition of customer service.”