Noah Webster, the Father of American Education, was a revolutionary soldier, judge, legislator, American Founder, and the creator of Webster’s Dictionary. He served served nine terms in the Connecticut General Assembly, three terms in the Massachusetts Legislature, and four years as a judge.

He strongly believed that all Americans should speak the same language, and he was quite concerned about spelling and pronunciation. Hence, he compiled the first American dictionary. His first edition was published in 1806 with 37,000 words. He published two more the following year. 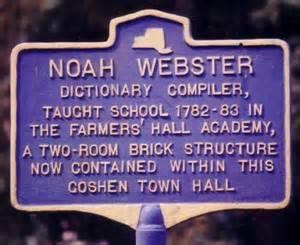 He spent the rest of his life cataloguing words. In 1828, he completed his final dictionary, one with 70,000 words. He used words like “color” instead of “colour,” and “magic” instead of “magick” and added uniquely American words such as “skunk,” “hickory,” and “chowder.” 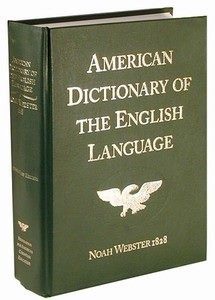 In December, 1808,  he wrote in a letter to Thomas Dawes:
“About a year ago, an unusual revival of religion took place in New Haven…and I was led by a spontaneous impulse of repentance, prayer, and entire submission of myself to  my  Maker and Redeemer.    In the month of April last,  I made a profession of faith.”. This unusual revival was a part of the Great Awakening that shook America in the early 19th Century.”

As evidenced in his textbook, “History of the United States, published in 1832, he believed that Christianity and government could not and should not be separated:
“The  religion  which  has  introduced  civil  liberty  is the religion of Christ  and  His apostles, which enjoins humility, piety, and benevolence;  which  acknowledges  in  every person, a brother or a sister, and a citizen with equal rights.    This is genuine Christianity, and to this we owe our free constitutions of government.”

“Every civil government is based upon some religion or philosophy of life.  Education in a nation will propagate the religion of that nation.    In America, the foundational religion was Christianity. And it was sown in the hearts of Americans through the home and private and  public  schools  for  centuries.  Our liberty,  growth,  and  prosperity was the result of a Biblical

philosophy of life.   Our continued freedom and success is  dependent  on  our  educating the youth of  America  in the principles of Christianity.”

Whether or not you believe in Noah’s philosophy of government,  one thing can’t be argued;   he was man of deep, abiding faith in God and appeared to be a Christian.