March 14, 2019 – Norovirus-like illness (stomach bug) is circulating in the community and increasing. It spreads very easily and quickly person to person and by touching surfaces contaminated with vomit or stool. Common norovirus outbreak settings are in enclosed places like nursing homes, daycare centers, schools and cruise ships. It is also a major cause of outbreaks in restaurants and catered-meal settings if contaminated food is served or people handling food are ill. Anyone can get norovirus and can have it more than once.

Norovirus is the most common cause of gastroenteritis in the U.S. The Centers for Disease Control and Prevention (CDC) estimates that a person will get norovirus about five times during their lifetime. Norovirus outbreaks occur throughout the year, but more than eighty percent of reported outbreaks occur from November to April. 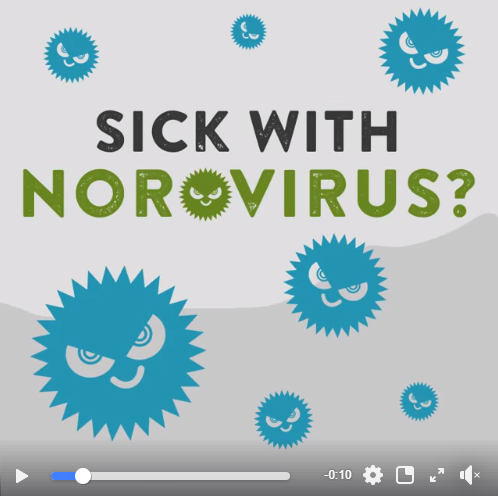 How You Get Norovirus
• Having direct physical contact with a person who is infected, such as caring for or shaking hands with a sick person and then touching your hands to your mouth.
• Eating food or drinking liquids that are contaminated with norovirus.
• Touching surfaces or objects with norovirus on them and then putting your hands in your mouth.
• People with norovirus illness are most contagious from the moment they begin feeling ill and for the first few days after they recover. Some people may be contagious for even longer.

“We are seeing increases in emergency department visits for stomach virus-like complaints. Schools, childcare settings and physician offices are also reporting more stomach illness in the past few weeks. Outbreaks are occurring in nursing homes and other long-term care settings. To reduce the risk of illness in our community, people should take preventive measures to stay healthy,” said Marcia Mansaray, senior epidemiologist.

Protect Yourself and Others from Norovirus
• Wash hands with soap and water, especially after using the toilet and changing diapers – and always before eating or preparing food. Hand sanitizers are generally not effective for norovirus.
• Handle and prepare food safely. People with norovirus illness should not prepare food for others while they have symptoms and for at least two days after they recover from their illness.
• Clean and disinfect contaminated surfaces (such as toilets, counters and doorknobs). Always clean up the entire area immediately after someone with norovirus vomits or has diarrhea. Put on disposable gloves and disinfect contaminated surfaces using a bleach-based household cleaner as directed on the product label or with a solution of five tablespoons of bleach to a gallon of water.
• Wash laundry thoroughly. Immediately remove and wash clothing or linens that may be contaminated with vomit or stool. Handle soiled items carefully – try not to shake them – to avoid spreading the virus. If available, wear disposable gloves while handling soiled clothing or linens and wash your hands after handling.
• Stay home if sick for at least 24 hours after symptoms end to avoid spreading the illness to others.