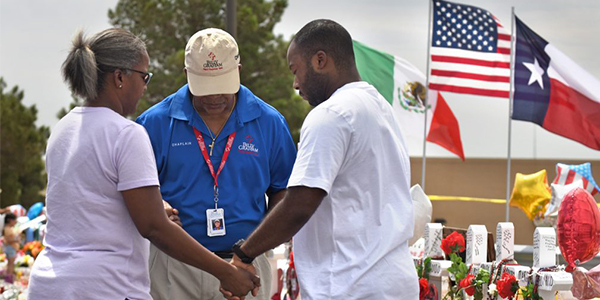 Teams of crisis-trained chaplains with the Billy Graham Rapid Response Team (RRT) deployed to El Paso, Texas, and Dayton, Ohio, following a pair of shootings the first weekend in August. News reports say 22 people have died and dozens were injured in El Paso. In Dayton, an additional nine people were killed and 26 people were hurt. RRT chaplains at both sites will work alongside government officials, churches, first responders and with the community at large to provide emotional and spiritual care.

“This is such a difficult time for both of these cities,” said Jack Munday, international director of the RRT. “In this time of shock, anger, brokenness and incredible loss, we can’t imagine the pain and suffering people are feeling from these senseless acts of evil. Yet, we know God hasn’t forgotten them, and seeks to heal the brokenhearted and bring comfort to those who grieve.”

For more information on the ministry, including videos, photos, news articles and an interactive map of former and current deployments, visit billygraham.org/rrt. Updates can also be found at facebook.com/RRTChaplains.