story and photos by Larry Pellet 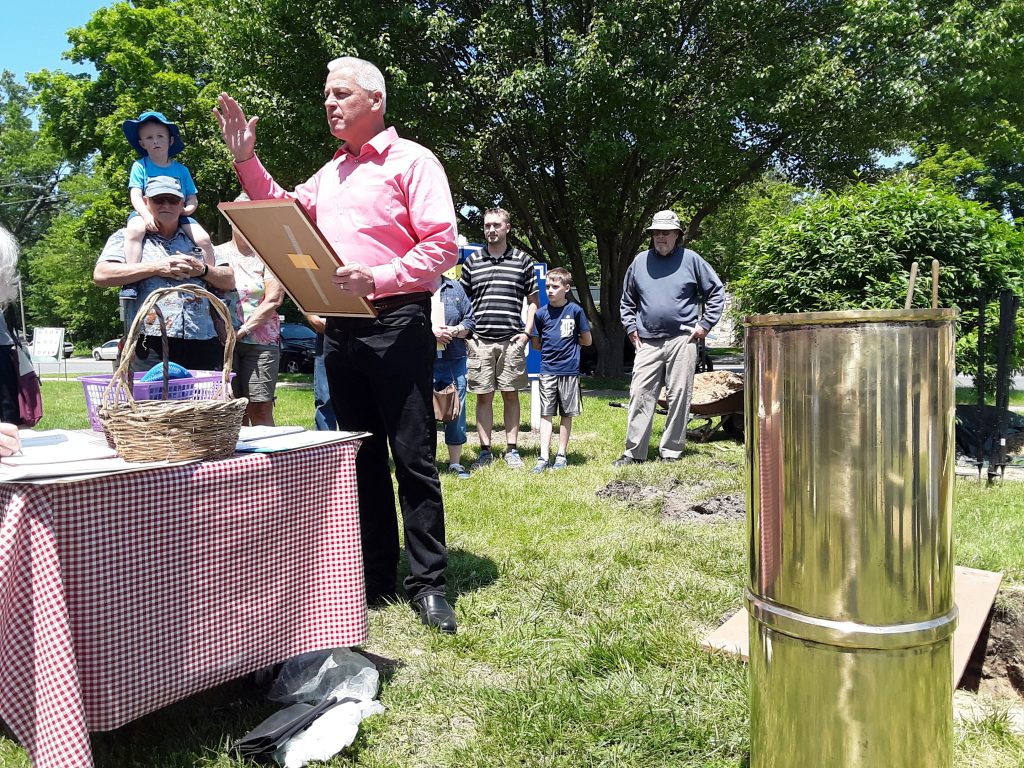 Amid a close knit community gathering highlighted by a certificate read by State Senator Jon Bumstead and signed by Governor Whitmer, Fruitport once again laid claim to the future on June 22, when it poured its heart, personal artifacts, and hopes for the year 2069 into a 4 ft long brass container, bestowing its blessings upon the time capsule to be opened on another Saturday 50 years from that exact day.

On June 22, 1969, in commemoration of Fruitport’s centennial, Alger along with Art Aldridge and a group of leading citizens filled and buried the polished brass cylinder.  50 years later, Aldridge says “I am glad to be here for this one”. 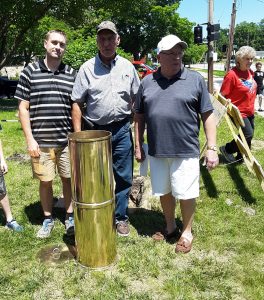 “I came up with the idea for the capsule in 1968 when I was 22”, said Alger.  “I brought the idea to the city council, and they immediately made me chairman”, he laughed.

Along with the original belongings placed in the capsule (minus 60lbs of commemorative coins), residents were encouraged to bring mementos, and to sign the original guestbook to be placed inside.  Also included inside was a rich history of the town named after its once-extensive fruit industry.  The canister slowly began to fill, and villagers in the next half century will be sure to be treated to some surprises, circa pre1969-2019.

Alger, for his part, gave a heart warming emotional speech, saying “It’s been a lot of fun for me…very exciting”, and library board president Dillon read a resolution declaring the importance of the event.

“It adds substance to our community”, added Fruitport mainstay Cooper. 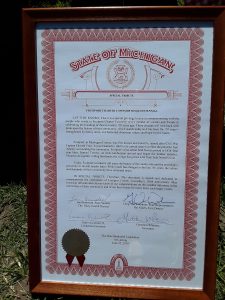 Once a small cement slab is placed over the capsule and buried, a 400 lb stone bench donated by Superior Monument and engraved with a basic history outline of what was once was known as Crawville will be set on top for a sentimental and practical memory of a unique and family oriented community.

Zwart, one of the ones in the under-50 crowd, says he “appreciates the recognition Fruitport’s Sesqi-centennial was getting, in particular the capsule”.  “I’ll be here or there in 50 yrs”, he grinned slyly.

As for Alger, a longtime Fruitport activist, this will be the last of his contributions before he rides off into the sunset, selling his Fruitport home and moving to Nunica.

His hope for the future of the capsule, of Fruitport, and of the spirit that has made the community proud, is that the younger generation will carry out the tradition he sought to preserve, and to remember the history of a town that so many feel blessed to have shared in.