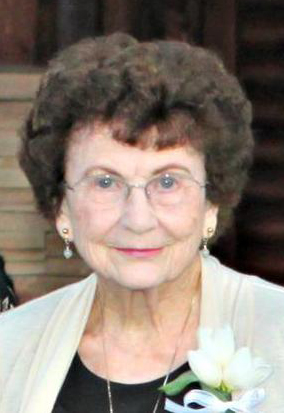 Lueneda Johnson, born September 15, 1919 has lived in Fruitport Township over 6 decades and her children (Craig Johnson and Diane Christianson) and her grandchildren (Tanya and Craig Johnson) attended Fruitport schools followed by successful careers. She has one great grandson, Connor Johnson.  Lueneda spent childhood on her father’s farm in Mississippi where she rode in a surrey with the fringe on top to church and worked after school in her father’s general store.  She went to Michigan to help her brother in his restaurant when help was scarce during World War II and was shocked by the first winter – but made her home in Michigan, returning to the south just to visit family.  In her southern family history is a celebrated Civil War hero for the south who led comrades in an escape from a POW camp in the north by tunneling out and leading them by foot back to their regiment. Lueneda Johnson had a career as a salesperson and also was one of the first store demonstrators, providing samples of a new dairy product, yogert. She also helped her daughter, a published writer, at her presentations and book sales from Michigan to Florida.  She has wintered in Florida with her daughter for over two decades but prefers her own home in Michigan the rest of year where she manages well on her own and tends her garden – with the occasional help as needed by her son and his family who live nearby.  She attributes her long life to living life with moderation and balance and a handful of Planter’s peanuts for a snack with her occasional television movie in the evening. She was honored for her 100 year birthday by Fruitport Township Board of Trustees at their meeting in Fruitport September 9, 2019.