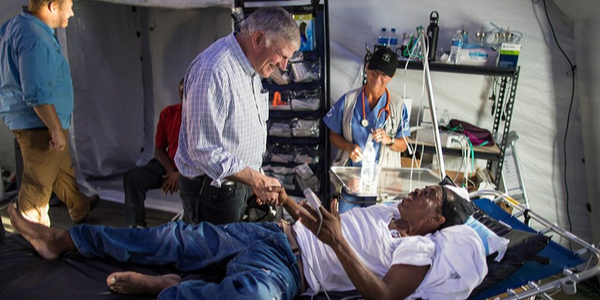 October 8, 2019 – The beginning of September brought devastation to the Bahamas and parts of the U.S. as Hurricane Dorian made its way of destruction. Responding to the catastrophe, the Billy Graham Rapid Response Team (RRT) deployed teams of crisis-trained chaplains to the Bahamas.

“… It is easy to see that the destruction this storm has caused in the Bahamas will leave a lasting impact,” said Jack Munday, director of the RRT.

Franklin Graham, president of the Billy Graham Evangelistic Association and Samaritan’s Purse, took time to encourage locals receiving care at the Samaritan’s Purse Emergency Field Hospital in Freeport, which was the island’s only hospital within days after the storm.

Despite the catastrophic tragedy that killed at least 51 people and left tens of thousands homeless and 1,300 missing, the islanders’ great faith in God has been an inspiration to the chaplains.

Additional RRT chaplains were in Florida visiting evacuation shelters, offering emotional and spiritual care to those temporarily housed there while the storm passes. The RRT also responded to the North Carolina coast following Hurricane Dorian.

For more information on the ministry, including videos, photos, news articles and an interactive map of former and current deployments, visit BillyGraham.org/RRT. Updates can also be found at Facebook.com/RRTChaplains.