The word ambitious might be an understatement to describe Cloverville businessman and former politician, Marty Hulka.  Polishing up on this, his SIXTIETH year as owner, operator and accountant of Marty’s Christmas Trees & Wreaths and More, the Air Force veteran waxes nostalgic as he recalls the hard years getting his business off the ground and soaring.

“It was 1959, and I was just out of the service”, he said.  “There were no jobs to be found”.  “My father had some Spruce Evergreens that he sold me for $1 ea., so I decided to take them and sell them for $1.75”.  Working out of a 1948 Chevy with coleman lanterns for heat and light, Hulka eventually found numerous other plantations to buy trees from, when, lo and behold, he found his calling.

Marty used profits to purchase 10 acres in Cloverville, which he then cleared off using dynamite.  But he conceded, business didn’t always didn’t run smoothly at first.  Partners let him down, and tree disease was something Marty didn’t expect to encounter.  But, he learned as he went along.  The hard working visionary, of Czechoslovakian descent, cut trees himself with a hand bow saw, and at last in 1968 finished building a house at it’s present location at 3768 E. Broadway. He subsequently bought, planted and grew 42 acres of trees, a process which he labels as “scientific”. 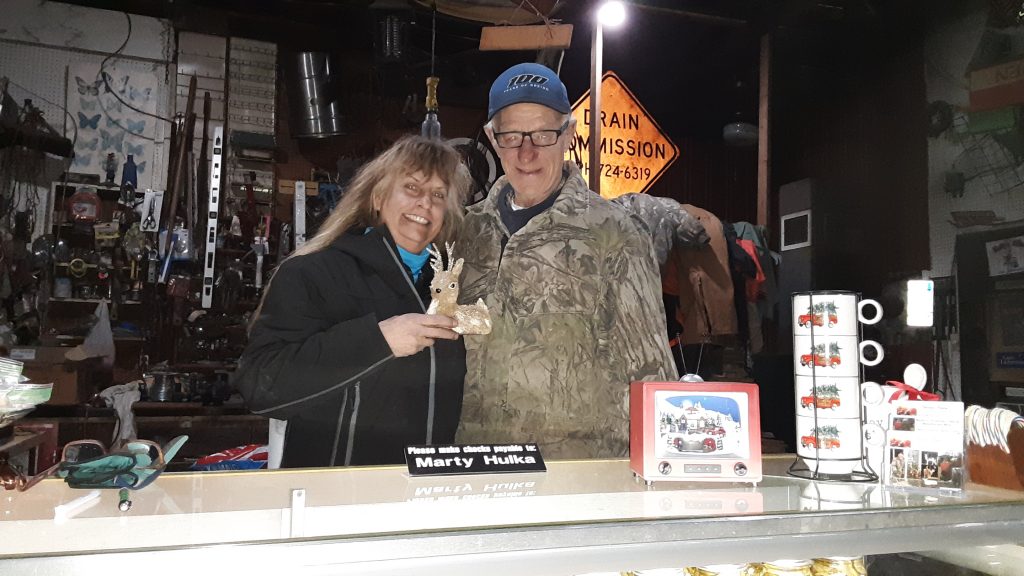 His reputation as an honest and upfront entrepreneur growing, Hulka decided to run for political office.  Along the way he added Fruitport Trustee, Supervisor, Muskegon Drain Commissioner and Tax Assessor under his belt.  A brother also entered politics, and nephew Ken Hulka is on the Muskegon Road Commission.  Also of utmost interest are the white tail deer, including a piebald fawn, which he breeds on his farm.

Pride and integrity are what guides his family, and in 1973 daughter Sandra began creating Christmas wreaths with the use of coat hangers, which initially sold for $3 apiece.  Today, she specializes in “theme” wreaths, which are original and personalized to fit the buyer’s desires.  In accordance with her family’s work ethic, Sandra says, “You always try to out-do yourself”.  Also available for sale are garlands, yule log centerpieces, porch pots, swags and boughs. 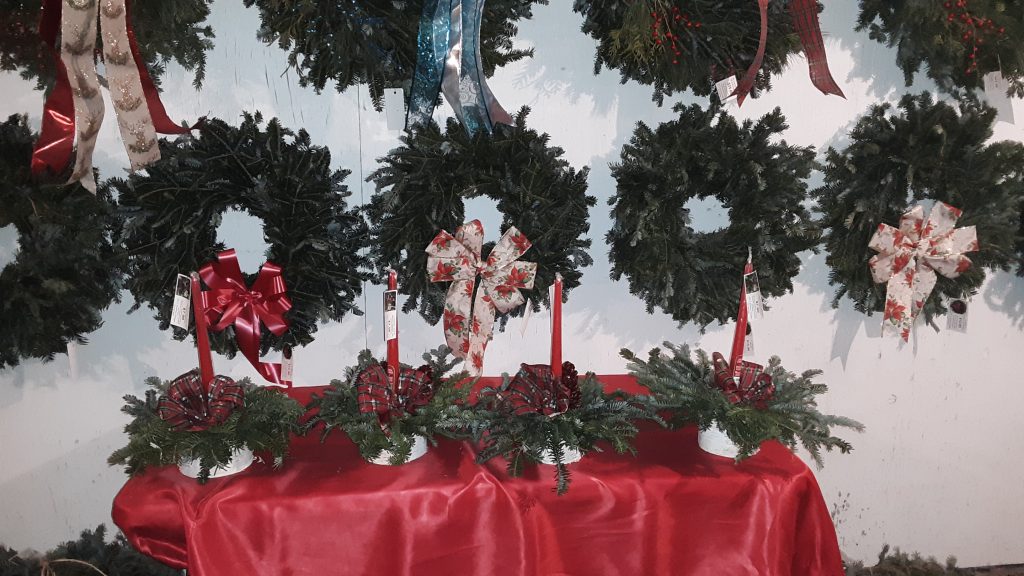 It takes roughly 12 years for a seedling to grow to fruition, where it can be cut for families to enjoy around yule time.  In 1995, Hulka cut and sold 1,026 trees by bow saw, but since has upgraded to a chain saw and will “guarantee your needles”.  Prices range anywhere from $45 to 70 per tree, depending on customer preference.  Though it’s quite literally Christmas year round there, business typically opens around Thanksgiving, and hours are long – 9am to 9pm, 7 days a week.

The robust 82 yr old, along with his daughter, seem to delight in their work and most of all appreciate repeat customers – which they have a lot of.

Hulka, pausing to fold his hands and lean back in his chair, reflected on all his years of blood, sweat and tears.  After a brief moment he then turned his gaze to the future.  “I imagine someday my daughters will take over the company”, he surmised.