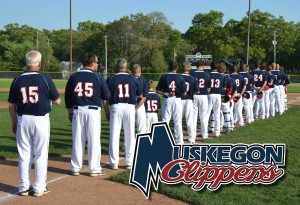 MUSKEGON, Mich., February 12, 2015 –Muskegon’s summer collegiate baseball team, the Muskegon Clippers, was a smashing success during its inaugural season in the summer of 2014. Smashing in more ways than one.  Not only did this wooden bat league defy the conventional wisdom of low scoring games but finished the year setting the leagues attendance record. The Clippers battled for the league championship right down to the last game of the year, where they just missed a chance to advance to the National Tournament.

“We were very pleased with the community support and the product we put on the field last year”, said Pete Gawkowski, local business man and owner of the ball club.  “We created a great experience for the fans, had high scoring competitive games, and set the stage for another great year at Marsh Field.

Part of what made the season such a success beyond the quality baseball, was the fan experience initiated by Gawkowski and Piasecki.  A party deck was established at Marsh Field which provided a VIP seating experience and party atmosphere. The concession food offerings were enhanced beyond the traditional hot dog and adult beverages were available for purchase.  In addition, walk up music for each Clipper batter was used to add excitement to the game.  Crowd participation with the action on the field and between innings became part of the uniqueness of Clipper baseball.  And finally, kids were allowed to run the bases after the games.

Jim Grevel, Director of Player Development for the Muskegon Clippers has several players from last year committed to returning again this year.  In addition, he has signed some star players from Universities around the State and the Midwest, including Ashland University in Ohio, Slippery Rock University in Pennsylvania and Northwood University in Michigan.

To help accommodate the players coming in from out of state, the Clippers are looking for Host Families willing to host a player during the summer season.  Each Host Family is asked to commit to providing a bedroom, access to a washer and dryer and daily meals.  The Clippers will assist the host family with a monthly stipend to help offset expenses. Host families are not required to provide transportation.

Several new things are in the planning stages for even more fun at Marsh Field this year.  Opportunities for company picnics, which would include food, beverages, kids’ activities and a baseball game, are being formulated.  Special group ticket sales information will be released soon.  More fan friendly games and entertainment will be added to the experience.  Special promotional events will be added for each home game to recognize special groups in the community.  Of course, the party deck will still provide for VIP treatment and will be available to rent.

The Muskegon Clippers home opener will be May 29, 2015 at 7:00pm, at Marsh Field, against the Motor City Pride from the Detroit area.  Individual game tickets are $5 for adults; $3 for students and senior citizens; children under 12 are free. Season ticket and group sales packages are also available.