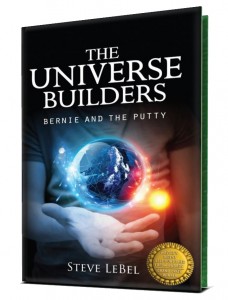 Writer’s Digest, one of the nation’s prestigious national literary organizations, has awarded its 2015 Grand Prize to a first-time fiction author, Steve LeBel of Muskegon, MI.

LeBel received the honor for his novel, a humorous fantasy and science fiction work entitled The Universe Builders: Bernie and the Putty.

The book, which LeBel began in 2012 and published last year through Argon Press, not only received the Writer’s Digest grand prize, but took the top honor for the year in the young adult category.

The Universe Builders is a whimsical tale of Bernie, a fresh graduate of God School, who has landed a probationary job in which he must create his first universe.

The young god has talent, intelligence and an enemy who threatens his future by secretively sabotaging Bernie’s work at every opportunity. LeBel says the plot focuses on the struggle between good and evil with many twists and built-in smiles and chuckles.

The grand prize, which includes a $3,000 award and an interview in the May edition of Writer’s Digest magazine, comes as shock since it is his first work of fiction.

Speaking with readers at several book-signings events in West Michigan, LeBel said he knew readers enjoyed the book. “But this award exceeded my fondest hopes,” he said. “We’re thrilled with the reception the book has received. Wonderful reviews have been coming in ever since it was published. Everyone tells me I need to write more stories about the universe builders.”

The Universe Builders appeared in ebook and print form last year, attaining best-seller status on Amazon and ranks as one of Amazon’s top-rated books in both the fantasy and science fiction genres.

LeBel holds bachelor’s and master’s degrees in psychology and counseling from Michigan State University and the University of Michigan. He began his career counseling youngsters who were sabotaging their own lives with drugs. He went on to spend 17 years as president of a psychiatric hospital. He retired from that occupation to found an internet company which he sold after 11 years, beginning a second retirement.

That was seven years ago. LeBel and his wife, Marge, now live in Muskegon with their two cats. He spends his time writing, petting cats, grousing at the stock market, and trying to make sure the 44 years he has invested in his marriage continues.