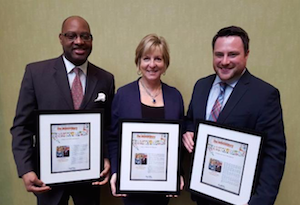 We are thrilled to announce that this year your Chamber President Cindy Larsen, along with Muskegon Area First President Ed Garner, and Downtown Muskegon Now (former) Executive Director, Johnathan Seyferth, were one of 56 newsmakers honored at the Newsmakers event at Fredrick Meijer Gardens and in the annual Newsmakers publication!

This recognition was a result of the successful launch of the three year community-wide image and marketing campaign – Watch Muskegon. Congratulations to other Muskegon newsmakers, Michael Brower of Pigeon Hill Brewing Co.
and Bruce Israel of the Muskegon Lumberjacks.