Inspired by the success of the recent Poor Farm Sesquicentennial Celebration in October, a documentary film on the facility was created and will premiere this spring in Holland and Grand Haven.

When the Ottawa County Poor Farm received its first resident in 1866, no one could have imagined the benefits it would provide over the decades. The Poor Farm was a haven for indigent people who, due to the happenstance of birth, misfortune, or poverty, were in dire straits and needed a place to call home—a sanctuary staffed with people who could nurse them to better health. Now, as Eastmanville Farm County Park, it provides hiking and equestrian trails to outdoor enthusiasts.

The Poor Farm: A Documentary, was made in association with the Ottawa County Parks Foundation and Ferris State University. Co-producers Assistant Professor, Joshua Pardon and local historian, Marjie Viveen gathered additional research following the October Sesquicentennial celebration event and many of the re-enactors who participated in that event were also interviewed for the film. FSU students edited the film to profile the iconic property and its amazing people. 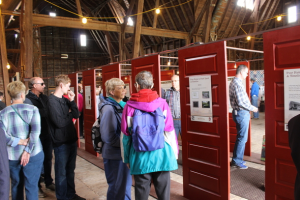 Viveen has dedicated the last year to recruiting a volunteer committee and planning the very successful Sesquicentennial event, researching more stories from the farm, and coordinating with the film crew to preserve the memories and the legacies of the people who worked and lived there. “The words ‘Poor Farm’ conjure up stereotypical images and beliefs in many people,” says Viveen. “‘Poor folks’ may not seem as smart or hardworking as we perceive ourselves, but years of researching the individual lives of Poor Farm residents has erased any ill-conceived notions I might have held. One need only ask, ‘Who would I become if I were unable to live independently?'” She thinks these stories might change your mind too, which is why the documentary project is so important to her.

“I entrusted the life stories of Poor Farm residents to Ferris State University film-maker Joshua Pardon. The resulting documentary is respectful, honest, heartfelt, and masterfully produced – a testimony to the professionalism of Joshua and his dedicated students. Every life is a story and a lesson. These will not be forgotten,” says Viveen.

There will be a special movie premiere event in both Holland and Grand Haven. At each event, guests can expect light snacks and a beer and wine cash bar. There will be a small silent auction and live music. The documentary will be introduced by the co-producers and its run time is about a half an hour. DVDs will be available for sale.