The grant was awarded for the Grand River Explorers Trail – Stearns Bayou Connector and is payable over two years.

Over the past two decades, a primary focus of the Ottawa County Parks Department has been its $41 million Grand River Greenway Initiative, with the goal of protecting thousands of acres of natural lands, creating green infrastructure, developing new recreational opportunities, and connecting communities. 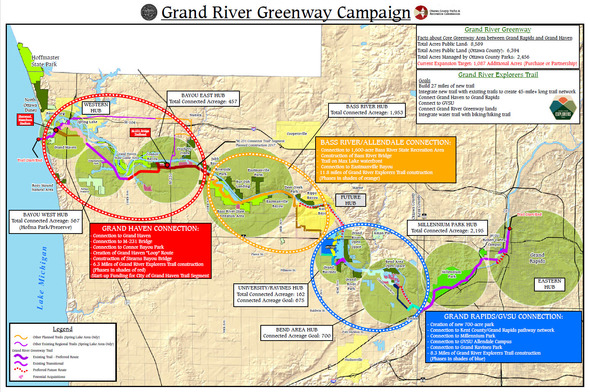 “So far, $20 million in mostly public funding has been invested to preserve over 2,400 of land and create 13 parks and open spaces along the Greenway. Over the next five years, Ottawa County Parks proposes to invest an additional $21 million to acquire 1,000 acres of land and construct 27 miles of new multi-modal pathway,” said Ottawa County Parks Director John Scholtz.

This investment will create recreational, educational, conservation and historic attractions by protecting some the highest quality land remaining along the river, connecting the greenway properties to each other, and completing the most critical remaining unfinished link in the regional pathway system – a trail, the Grand River Explorers Trail, connecting Grand Rapids, Grand Haven, and Grand Valley State University.