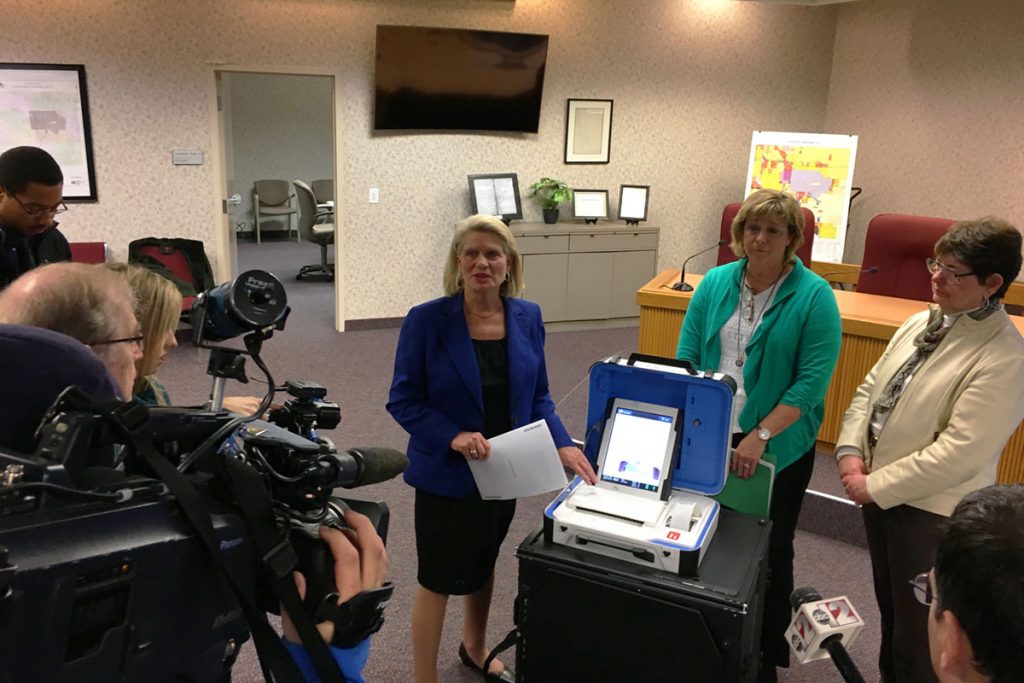 As local clerks finalize ballots for the statewide primary, Secretary of State Ruth Johnson today detailed how new voting equipment, $11 million in new federal security grants and the extensive preparations her office has made will better protect Michigan’s elections system for the 2018 election cycle.

“Most importantly, every voter across Michigan still will use a good, old-fashioned paper ballot to mark their choices,” Johnson said three weeks before the August primary ballots will be sent out. “Then they’ll feed the ballot into a new next-generation voting machine designed with security in mind. But buying all new election equipment isn’t all we’ve done to safeguard our election system.”

“We carefully reviewed and improved our systems, and we’ll be putting $11 million of federal security grants toward further strengthening them against attack. Plus, we’re adding required cybersecurity training to our local clerk education programs.”

The Aug. 7 primary will be the first statewide election in which every city and township will use all new voting equipment that includes optical-scan ballot tabulators, accessible voting devices for voters with disabilities, and election-management and reporting software.

• Next-generation voting equipment that offers added security features over the older systems, including stronger multi-factor access controls, advanced data encryption and better physical security of tabulator access points with locks and seals. Tabulators are not connected to the internet.

The state paid for the equipment with $10 million that Johnson pushed the Legislature to approve and $30 million in federal money that Johnson and her predecessor saved for more than a decade. Cities and townships have had no upfront costs for the new equipment. Michigan was one of the only states that saved a substantial amount of federal funds to assist with the purchase of the next-generation voting systems, and one of the only states able to implement new voting systems statewide for use in the 2018 election cycle.

• $11.2 million in election security grants that Michigan will receive this year to upgrade elections systems. Bureau of Elections staff is finalizing how the money will be spent, but the plan will include a strong focus on security assessment – including comprehensive tests and other cybersecurity measures at the state, county and local level. The state must contribute $500,000 to receive $10.7 million that Congress approved this year for Michigan. The money is in addition to the extensive cybersecurity efforts already employed by the state of Michigan, which constantly monitors systems for suspicious activity and protects against cyberattacks.

• An upgraded Qualified Voter File system used by the Bureau of Elections and local clerks to maintain the state’s registered voter list and other election-related data. Besides being an improved, modern system that will help clerks perform their work more efficiently and effectively, the new system features enhanced security built in from the ground up over its 20-year-old predecessor.

• Strengthened relations with state and federal law-enforcement and homeland-security agencies. The Bureau of Elections can report any suspicious activity it detects — cyber or otherwise — with the Michigan Intelligence Operations Center, which shares threat information among local, state and federal agencies, including the FBI, Michigan State Police, Michigan National Guard and the U.S. Department of Homeland Security. The Department of State has a staff person who participates with center. Additionally, Homeland Security officials now regularly share pertinent information, tools and services with state elections officials to assist them in thoroughly assessing and securing all aspects of their systems. Secretary of State staff have also participated in briefings for election administrators from federal homeland security officials.

• Post-election audits that now include ballot validation. Bureau of Elections and county clerks now include ballot validation in the post-election audit process. After this November’s general election, ballot tabulation validation will be completed for the first time for a statewide election, involving every county with some randomly selected precincts. This process will verify that the voting machines properly tabulated ballots. The previous process, in place since 2013, already verified the successful completion of appropriate pre-election programming and testing steps. Post-election audits, which were started by Johnson, verify local election workers are performing their duties correctly and help target training programs to better assist election workers.

In addition to the new equipment and initiatives, Michigan elections will continue to feature long-standing accuracy and integrity practices that include:

• A detailed, thorough canvassing and certification process that each county performs after each election for up to two weeks. During the canvass, each precinct’s results are scrutinized, and ballot and voter numbers are cross-checked to make sure everything adds up. Each county’s canvassing board, which certifies election results, is made up of two Republicans and two Democrats. In addition, state and federal races are then canvassed and certified by the bipartisan Board of State Canvassers.

• Voting machine public testing. Every ballot tabulator used in each of the state’s 4,800 precincts is tested before every election in a public forum to verify it will tabulate ballots accurately, and then is physically secured until Election Day.

• Election precincts open to the public and representatives of political parties and other groups to observe voting and ensure officials are performing their duties properly.

• Continuous voter-list maintenance efforts. the Bureau of Elections and local clerks regularly scrub the voter list to remove ineligible voters. During Johnson’s time in office, The Bureau of Elections has removed 1.2 million ineligible voters, including 134,000 who have moved out of state and registered in a new state, 563,000 who died and 3,512 who were noncitizens.