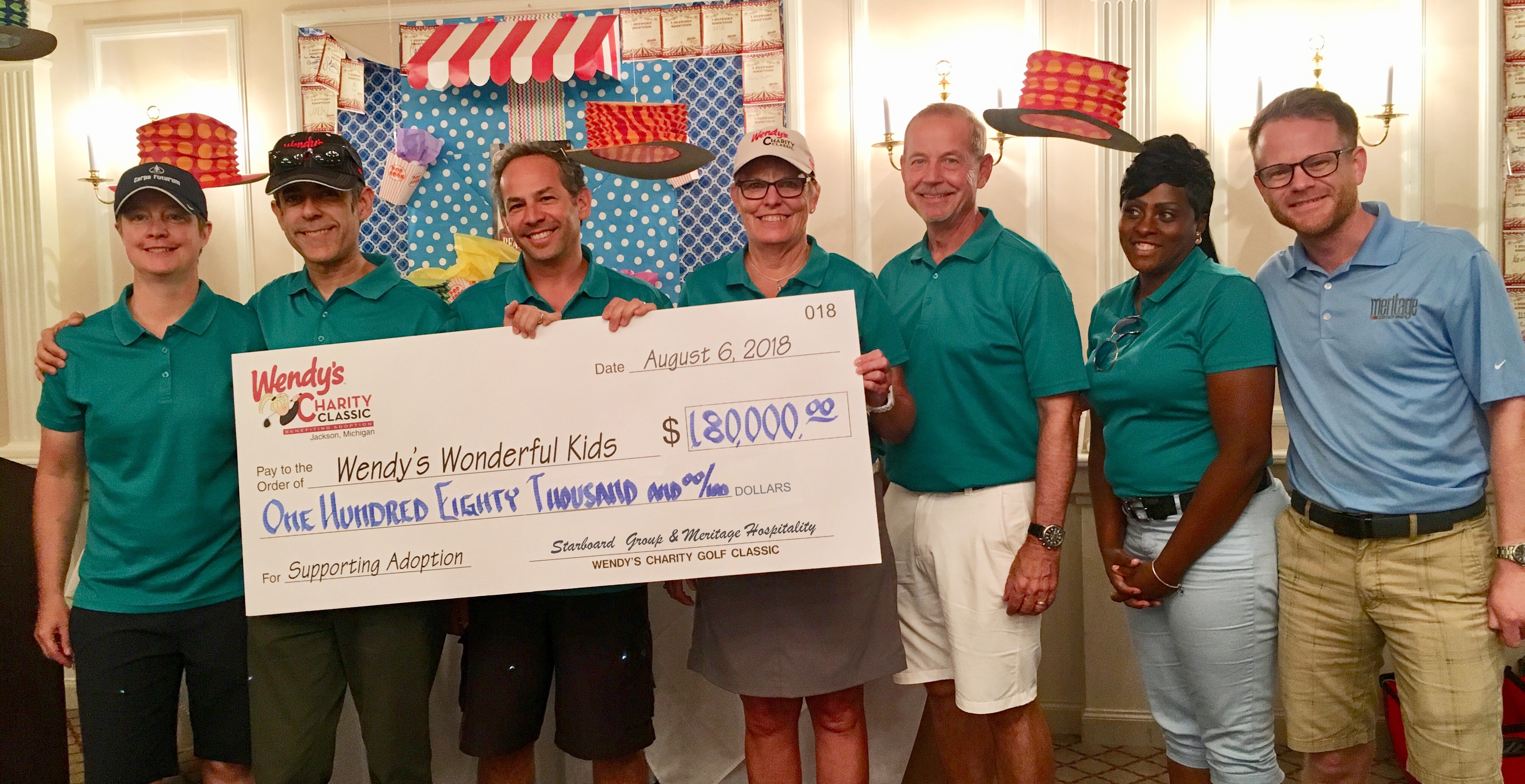 (Jackson, Mich.) – The 18th annual Wendy’s Charity Classic presented by Coca-Cola was held on Monday, August 6 and featured veteran LPGA Tour players now active on The Legends Tour. The event raised over $180,000 for Wendy’s Wonderful Kids and The Dave Thomas Foundation for Adoption.

Hosted since 1999 by Jackson resident Elaine Crosby, a two-time champion on the LPGA Tour with one win on The Legends Tour, the pro-am was co-sponsored by Starboard Group and Meritage Hospitality Group, the two largest Wendy’s franchisees in the state with 119 locations combined.

“The Legends players look forward to this event every year,” said Crosby, who recently competed in the inaugural U.S. Women’s Senior Open, a major championship held for women age 50 and over at Chicago Golf Club. “We’re still very active and care very much about this cause. We’ve played in hundreds of pro-ams over the years and this is my favorite for obvious reasons but I can tell you, it’s also high on the list for many of our pros.”

Staged at the Country Club of Jackson on the Pines and Woods courses, the pro-am included such fan favorites as Jan Stephenson, Michelle McGann and Rosie Jones. The 22 LPGA Legends who appeared combined for over 135 wins on the LPGA Tour.

Starboard Group, a Florida-based franchisee with Wendy’s stores in 8 other states, adopted the Wendy’s Charity Classic in 2016 when they purchased Stanton & Associates, Inc. (SAI), a Wendy’s franchisee headquartered in Jackson for 42 years.

“This event means a lot to the kids and to this community,” said Marcos Silva, who co-owns and operates 179 Wendy’s in nine states along with Andrew Levy. “Thanks to the generosity and support of all the sponsors and participants, we are thrilled with the funding we are able to provide to these critical foster care adoption programs.”

Funds raised by the Wendy’s Charity Classic support four Wendy’s Wonderful Kids adoption recruiters in Michigan and northern Ohio. The recruiters focus on children in foster care who have been waiting the longest for a “forever home.”

“Meritage Hospitality Group is proud to have been a co-sponsor with Starboard Group in the 2018 Wendy’s Charity Classic,” said Weston Persons, Brand Manager at Meritage Hospitality Group, a Grand Rapids-based Wendy’s franchisee co-owned and operated by Robert Schermer and Gary Rose. “To date, the event has raised over $3.1 million to help children find forever families, and we know Wendy’s founder, Dave Thomas, would be proud of all of us at Wendy’s for fulfilling his legacy of giving back to the communities where we live and work.”