Dozers, graders, and rollers are clearing the way for the next segment of the Idema Explorers Trail in Georgetown Township. Crews are constructing 1.17 miles of 10’-wide pathway along Cottonwood Drive and 10th Avenue near the Jenison business district.

The Cottonwood Drive segment is part of a multi-year effort to complete the core Grand River Greenway in Ottawa County. The effort includes purchasing up to 700-acres of additional land along the Grand River and constructing 27-miles of new trail (the Idema Explorers Trail) to connect the Greenway lands together over the next five years. 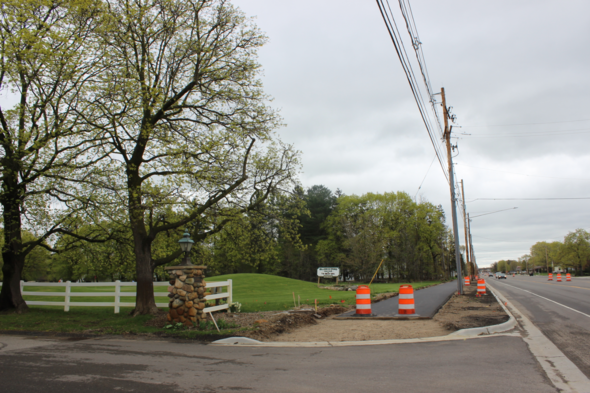 The Idema Explorers Trail is being constructed in phases along the south side of the Grand River. Once completed, the non-motorized multi-use pathway will be 35 miles in length and will connect together eight county and state parks in Ottawa County. It also connects Millennium Park to Grand Haven for the first time, the two Grand Valley State University campuses together, and hundreds of miles of regional trails including a direct route to downtown Grand Rapids.

The Parks Foundation funding was made possible through its Grand River Greenway Campaign which is co-chaired by Peter Secchia, Monica Verplank, and Samantha Verplank. To complete the entire project, more funding is needed and donor engagement is ongoing. Enough funding has been raised to leverage future potential grants and construct 2/3 of the trail route. Still, to help ensure that the $41 million, multi-decade Greenway project is completed, $1.2 million in philanthropic funding is still needed.

“We believe the Idema Explorers Trail will be a vital recreational and pedestrian/bicycle transportation route for people in Ottawa County as well as for visitors all over West Michigan and beyond,” said Secchia. “It is great to see the next step being taken, but we need to continue to work together to support the Greenway so that we can re-connect our communities back to the river.”

“There is seven miles of riverfront in Georgetown Township, but there is no bikeable/walkable access to the river for most of our residents,” said Georgetown Township Supervisor Jim Wierenga. “The work being done on Cottonwood Drive moves us closer to making that possible.”

The new segment of Idema Explorers Trail along Cottonwood Drive will be important transportation route for the more densely populated neighborhoods of the Jenison area. It also sets the stage for important future connections/amenities including:

• Future connections to protected park areas (the Bend Area and as yet an unnamed 40-acre space north of Baldwin Street)
• Future direct connection to Kent Trails near the Ottawa/Kent County border once trail is constructed to the east.
• Future connection to the Grand River waterfront which will the first walkable/bikeable route to public land along the Grand River in Georgetown Township.

The Ottawa County Road Commission is administering the TAP grant and also designed the project. Brenner Excavating out of Hopkins Michigan is handling construction.

For more info on the 2019 construction visit: https://news.miottawa.org/idema-explorers-trail/

To help complete the Greenway, the Parks Foundation launched the Grand River Greenway Campaign which is now only $1.2 million from completing its fund-raising goal. To learn more or donate, visit http://ottawacountyparksfoundation.org/ or call 616-215-6544.